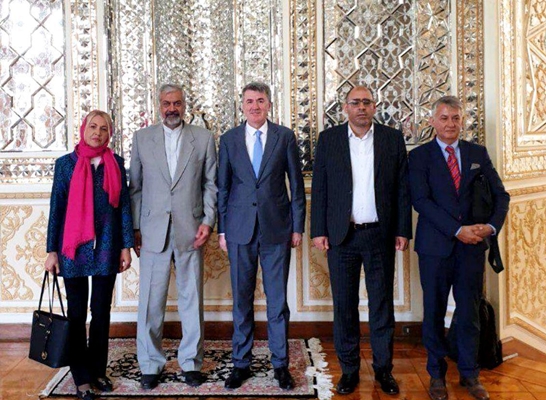 Members of a Serbian parliamentary delegation have sat down for talks with the Iranian Deputy Foreign Minister Morteza Sarmadi in Tehran.

In the Wednesday meeting, Sarmadi discussed bilateral issues as well as regional and international developments with Žarko Obradović, the chairman of the Serbian National Assembly’s Foreign Affairs Committee, as well as several other Serbian lawmakers accompanying him.

Obradović, who is also head of the Iran-Serbia Parliamentary Friendship Group, underlined Iran’s key status in West Asia as well as the promotion of bilateral relations in recent years.

He said Serbia is interested in boosting all-out ties with Iran on all political and parliamentary fronts. He also underscored the need to enhance mutual economic and trade cooperation.

He welcomed Tehran-Belgrade cooperation in international circles and invited Iran to take part in an Inter-Parliamentary Union (IPU) meeting slated to be held in Serbia this autumn. He called on Iran to actively participate in the event.

The Iranian official, in turn, touched upon age-old relations as well as the expansion of political and parliamentary consultations between the two sides in recent years. He underscored the necessity of upgrading mutual cooperation in economic and commercial domains while expressing Tehran’s readiness to remove trade barriers and boost trade ties.

Elsewhere in his remarks, Sarmadi said the policy of unilateralism in international relations amounts to a serious threat on the international stage. He called on independent and freedom-seeking countries to further enhance their unity and solidarity to counter this dangerous policy, which has jeopardized international peace and security.