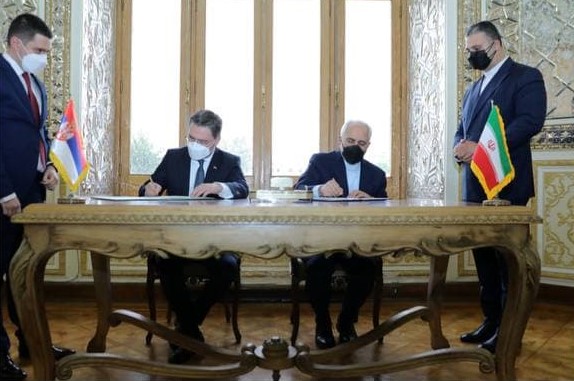 During the talks, Zarif touched upon the historical relations between the two countries and highlighted that the Balkans has a significant status in Iran’s foreign policy.

The top Iranian diplomat highlighted the need to maintain and expand relations between Tehran and Belgrade on different political, economic, trade and cultural fronts by drawing on innovative and creative mechanisms.

He underscored the existing potential in the economic domain, urging closer economic cooperation.

The Serbian foreign minister, in turn, referred to the existing potentialities in bilateral relations in economic and industrial domains.

He also said the signing of a cooperation document between the foreign ministries of both countries will be useful for future collaboration between the two sides.

Among other topics on the agenda of the talks were the importance of holding the sixteenth meeting of the two countries’ joint economic commission in order to enhance mutual partnership, especially in the economic domain, issues related to the United States’ unilateral and cruel sanctions, regional issues, including those pertaining to the Balkans and regions surrounding Iran, Tehran-Belgrade cooperation in international circles, as well as measures adopted by both countries in fighting the coronavirus and developing a vaccine for the disease.