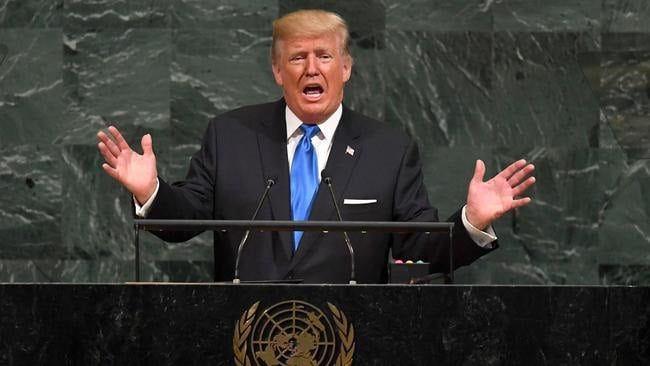 An Iranian lawmaker says US President Donald Trump is not eligible to chair the upcoming meeting of the United Nation Security Council because no one, after Hitler, has violated so many treaties and international conventions as he did.

Heshmatollah Falahatpisheh, the Chairman of the Iranian Parliament’s National Security and Foreign Policy Commission, believes after German strongman Adolf Hitler, who committed various crimes and violated numerous international treaties, no one has violated so many conventions as Trump did.

He pointed to Iranian President Hassan Rouhani’s upcoming trip to New York to attend the UN General Assembly, and said he must question Trump’s presidency over the UN Security Council meeting in his speech.

“This year’s UNGA has coincided with the United States’ presidency over the UN Security Council, so Rouhani’s presence should be more effective than previous years.”

“The first issue is the illegitimacy of the United States’ presidency over the Security Council. After the withdrawal of the United States from the nuclear deal, Tehran took a logical position and showed it is responsible towards the world. The Islamic Republic was not trapped by the US shenanigans, and adopted a diplomatic stance.”

At this year’s summit, the president should outline this position of Iran and state the costs that Iran has paid for it, underpinned Falahatpisheh.

President Rouhani should articulate Iran’s expectations from other countries in the world, and emphasise that they should not follow the sanctions of the United States and appreciate Iran’s multilateral approach, stated the lawmaker.

He added that the president should also show the authority of the Islamic Republic of Iran at this summit.

Falahatpisheh’s remarks were in reaction to criticisms against President Rouhani’s visit to New York, which began with the comments of Ayatollah Ahmad Jannati, the chairman of the Assembly of Experts a few days ago.

He was strongly opposed to a possible meeting between Hassan Rouhani and Trump on the sidelines of the United Nations General Assembly.

However, Rouhani recently said that Iran receives a message once in every two weeks from the United States to negotiate.

“On the one hand, they are putting pressure on the Iranian nation, and on the other hand, they send messages that we can hold talks,” said Rouhani.