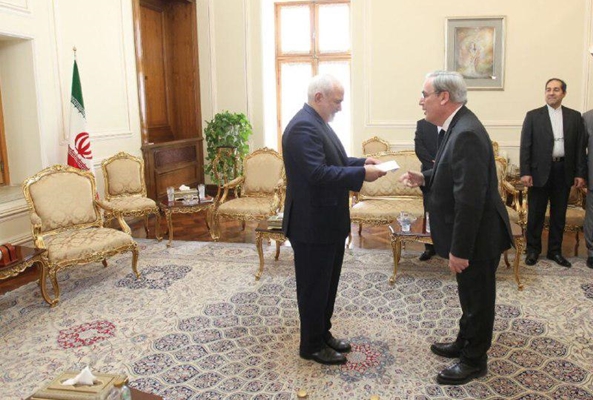 Iranian Foreign Minister Mohammad Javad Zarif says the Islamic Republic is prepared to join hands with the French government to resolve regional issues, especially those in Libya and Sudan.

Zarif made the comments in a Sunday meeting with the new ambassador of the French Republic to Tehran, Philippe Thiebaud, during which he presented a copy of his credentials at the beginning of his mission

In the meeting, FM Zarif referred to the historical and long-term relations between the two countries and the positive attitude of the people of Iran towards France, and called for the removal of the barriers in bilateral relations relying on the wisdom and prudence of the two states’ authorities.

Zarif pointed to the presence of the MKO terrorist group on French soil, and described it as a problem between Tehran and Paris.

The Iranian foreign minister also announced the Islamic Republic’s readiness to hold talks and have cooperation with the French officials to solve the problems of the region.

Pointing to the dangerous developments that recently unfolded in North Africa, including Libya and Sudan, FM Zarif noted they were the result of the intervention of some Arab countries in the region.

Elsewhere in his remarks, FM Zarif criticised the recent statement by the Group of Seven and the French ambassador to the United States regarding the peaceful nuclear activities of Iran, saying that such positions would destroy the 2015 deal between Iran and world powers.

For his part, the French ambassador referred to the recent talks between the presidents of Iran and France, underlining that Paris is willing to continue talks with Tehran on regional and international issues.

“The position of France, as underlined in the telephone conversation of the French president with President Rouhani, is to remain in the JCPOA and support and fulfil both sides’ obligations,” he noted.

Thiebaud referred to Iran’s fulfilment of its obligations under the JCPOA, and highlighted the efforts made by France and the role it played in the establishment and introduction of INSTEX, the European special purpose vehicle aimed at facilitating trade with Iran under the US sanctions.