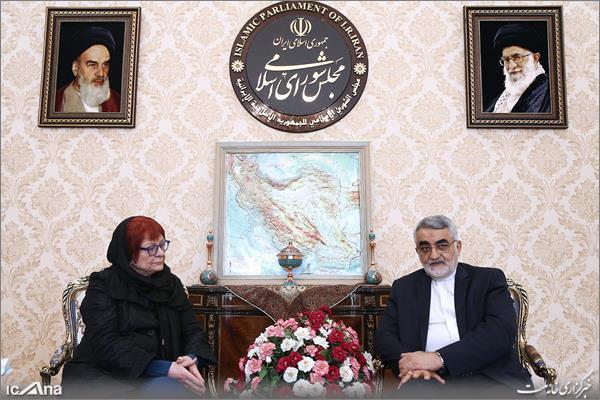 The Islamic Republic of Iran’s opposition to nuclear weapons production is permanent, a senior Iranian MP said, adding that use of nuclear weapons against others is the country’s red line.

Alaeddin Boroujerdi, the chairman of the Iranian Parliament’s National Security and Foreign Policy Commission, says Iran avoids producing nuclear weapons not only because of its commitment to the Non-Proliferation Treaty but also due to a Fatwa (religious decree) by Leader of the Islamic Revolution.

“Our opposition to nuclear weapons production is among the permanent principles of the Islamic Republic of Iran. It is our red line,” he was quoted as saying in a Farsi report by ICANA.

The Iranian lawmaker said the “train” of Iran’s nuclear program is moving ahead within the principles of the signed international agreements and added the ground is prepared for Iran to press ahead with its peaceful nuclear program in which nuclear bomb has no room.

He made the remarks in a Wednesday meeting with the Executive Director of European Security and Nuclear Disarmament Network, Tarja Cronberg, in Tehran.

Boroujerdi referred to the recent decision by the US to violate its commitments under the Iran nuclear deal and said Tehran has no motivation to remain further in the JCPOA if the US pulls out of the nuclear deal.

“If the US Congress decides to pull out of the JCPOA, the Islamic Republic of Iran will have no motivation to remain in the nuclear deal and the world would come to this sense that the capabilities of Iran to press ahead with its nuclear program are much higher compared with the pre-JCPOA era,” he said.

He then pointed to the latest regional developments and said Iran vehemently defends the territorial integrity of all regional states including Iraq and Syria.

“The decisions by the US president contribute to some regional states but the Islamic Republic of Iran has never supported any war or bloodshed in the region and always defends peace in the world and the region,” he added.

Broujerdi also referred to Europe’s stance towards the Iran nuclear deal and said Tehran expects the European countries to stand strongly against the other side’s violation of the international deal.

For her part, the European official expressed hope that the remaining disputes over the JCPOA implementation be removed soon and added, “Doubtlessly the Islamic Republic of Iran and Europe have common interests particularly in economic fields.”

“Iran has not yet benefited completely from the economic fruits of the JCPOA,” she added.

She went on to say the European states are after a mechanism to preserve the Iran nuclear deal and added their efforts will continue in the future.

She finally voiced hope that the economic ties between Iran and the US flourish and added the preservation of the JCPOA is in the interests of all involved sides.

During the meeting the two sides also exchanged views on bilateral, regional and international issues.