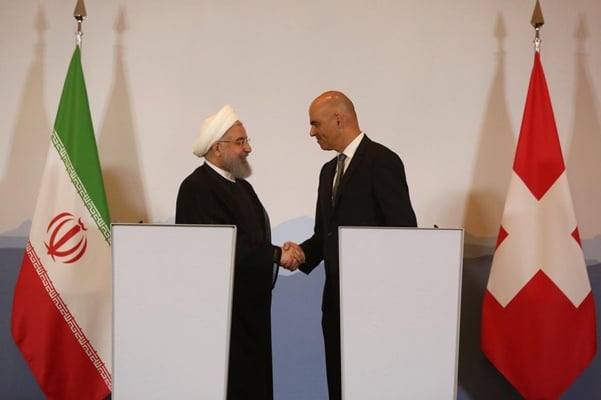 Iranian President Hassan Rouhani, who paid an official visit to Switzerland on Tuesday, says the two countries are determined to expand their bilateral ties in various areas.

“We had friendly and constructive talks with [Swiss President] Alain Berset in Bern. The two countries are resolved to have close and targeted cooperation in various fields of economy, business, science, technology, and tourism while respecting the international law,” he noted in a tweet on Tuesday night.

“The agreements reached [between Tehran and Bern] promise a bright future in bilateral ties,” he added.

Speaking at a joint press conference with his Swiss counterpart Berset on Tuesday, President Rouhani said Iran and Switzerland have decided to boost ties in financial, banking, trade, investment, tourism, scientific and cultural sectors, he added.

He also noted that his negotiations in the trip to Switzerland have made him confident that “the two countries are resolved to very well overcome the possible problems that trade ties of the two countries will face in the coming months.”

For his part, the Swiss president said he has held talks with his Iranian counterpart on the financial and economic issues, voicing Switzerland’s eagerness to host a scientific delegation from Iran for cooperation in the scientific and research affairs.

Before the press conference, officials from the two countries signed two statements on scientific and medical cooperation as well as an agreement on road transportation.

Heading a diplomatic and economic delegation, President Rouhani travelled to Switzerland for a tour that later took him to Austria.

The trip comes after the US administration announced plans to get as many countries as possible down to zero Iranian oil imports and launch a campaign of “maximum economic and diplomatic pressure” on Iran.