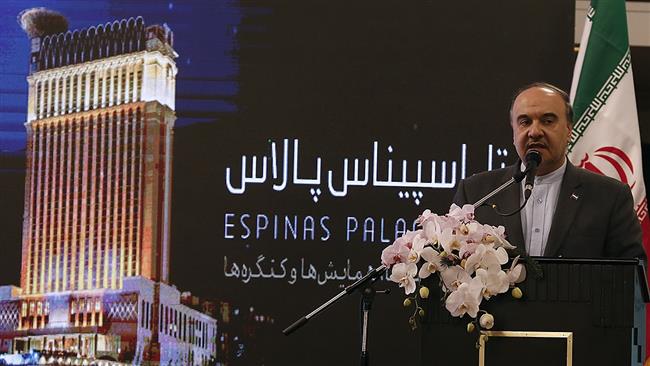 Soltanifar said that some of the new hotels are ready to be opened provided that the required financial resources are provided to their contractors.

Iran’s top tourism official says the country is constructing 125 new four- and five-star hotels, stressing that the figure is a record in the Iranian hospitality industry.

Masoud Soltanifar, the head of Iran’s Cultural Heritage, Handicrafts and Tourism Organization, said the Rouhani administration has over the past two years constructed as many luxury hotels as the ones constructed in the country over the past century.

Speaking in a ceremony to inaugurate Spinas Palace Hotel in uptown Tehran, Soltanifar emphasized that some of the new hotels are ready to be opened provided that the required financial resources are provided to their contractors.

He further emphasized that the recent progress in Iran’s nuclear case and the prospects for the removal of sanctions against Iran have provided a bright outlook for the country’s tourism industry.

Iran has an ambitious target to increase annual visitor count by five-fold to 20 million by 2025 in order to generate $30 billion a year.

Reports emerged earlier that international hoteliers are heartened by the plan. Hotel groups in the Persian Gulf Arab states are specifically believed to have already drawn up plans to boost their portfolios in Iran as they see the country emerging as the most lucrative hospitality development market.

Europe’s largest hotel group Accor has also constructed two four-star hotels at Imam Khomeini International Airport outside the Iranian capital. The UAE-based Rotana plans to open its five-star 600-room hotel in Tehran this year and another in the pilgrimage city of Mashhad.