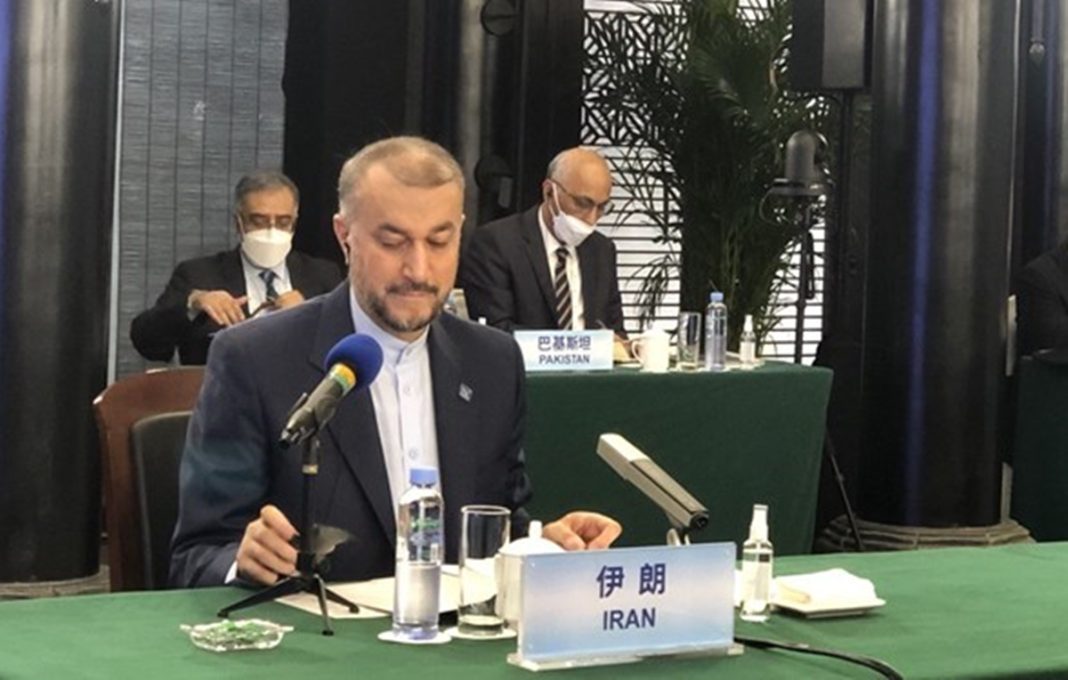 The Iranian foreign minister says Tehran is seriously concerned over Daesh terror group recruiting inside Afghanistan as well as in some regional countries.

In an address to the third conference of the foreign ministers of Afghanistan’s neighbors in China, Hossein Amir Abdollahian also said Daesh is training its operatives and seeks to further expand toward the northern areas of Afghanistan, which is of great concern.

The Iranian foreign minister expressed hope a ‘calm Afghanistan’ will be established in Iran’s vicinity.

“In the previous meeting, the Islamic Republic of Iran put forward two clear proposals. First, that we should reinforce mechanisms required to help promote security in Afghanistan, and that a clear security mechanism should be devised within the framework of the existing organizations or as an independent body to coordinate policies to fight terrorism and to exchange experience and information to contribute security both in Afghanistan and in the whole region,” he explained.

“Our second proposal is that a regional mechanism as well as a financial fund should be established to help Afghan people, one which would contribute to Afghanistan’s reconstruction and development,” the minister said.

“Our lingering concern is the threat of terrorism spreading from within Afghanistan, the expansion of Daesh and its recruitment inside Afghanistan as well as in some regional countries along with moves that Daesh makes to train its operatives and further expand toward the northern areas of Afghanistan,” he added.

“The Islamic Republic of Iran is concerned over and increasing number of Afghan refugees. Over the past seven months, around one million Afghan women, children and men entered Iran, and now the number of Afghan refugees who are our guests has risen to around 5 million. There is grave concern in this regard, especially at a time when international organizations pay little attention to refugees in countries neighboring Afghanistan,” he said.

The foreign minister also touched upon the necessity of women playing a role in Afghanistan.
“To us, women’s role in Afghanistan is very important. Islam is a progressive religion and that of mercy, which believes women have every right to be present in different areas. It is necessary to once again stress the importance of women’s role in the Muslim Afghan community,” he added.

Elsewhere in his remarks, the top diplomat referred to the issue of unfreezing Afghanistan’s assets and the United States’ claim of contributing to Afghanistan’s reconstruction.

“It is important to unfreeze Afghan people’s assets outside the country in order to serve them. The United States’ occupation of Afghanistan 20 years ago, and now its confiscation of Afghanistan’s assets, are inappropriate moves. The US occupied Afghanistan for 20 years, but failed to build even a small room as a clinic for Afghan people. But today, the Americans speak of reconstructing Afghanistan. If they were really interested in helping, we wouldn’t be witnessing the deplorable humanitarian situation in Afghanistan,” he said.

“All the pledges we make today are related to an important issue. Afghanistan needs the establishment of an all-inclusive government represented by all groups. The formation of a government guarantees stability, security, progress and welfare in Afghanistan. We have not come together today to decide for the Afghan people; rather, we are here to help all Afghan people have a bright and prosperous future full of welfare,” he said.