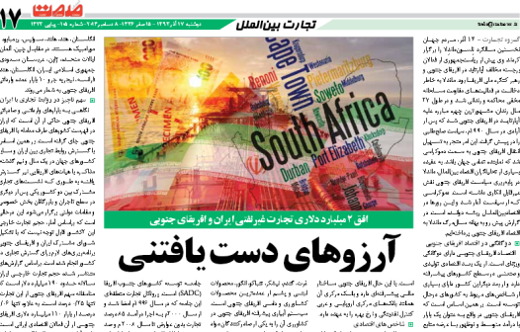 It is not hard for Iran and South Africa to raise their non-oil trade to $2 billion if their business sectors earnestly get down to business.

SMT daily on December 8 filed a report on the prospect of trade ties between Iran and South Africa, saying the $2 billion target set for bilateral non-oil trade is by no means overambitious; on the contrary it is quite achievable. The following is a partial translation of the report:

South Africa is viewed as an emerging middle-income economy with manifold rich natural resources. Although this country mainly relies on mines, industrial products, services and agriculture, it is also known for its big potential in the areas of communications, energy, and transportation. The South African government is committed to an open market economy and pursues privatization as it attracts foreign investment.

Iran is on the list of the countries which have trade ties with South Africa. Over the last one and a half years, Iran has developed its business relations with other countries, including South Africa. Since the two sides’ trade volume is meager, a joint Iran-South Africa Council has been tasked with promoting mutual trade.

Statistics also show that Iran earned $59 million from exports to the African country and imported $27 million worth of goods. This comes as South Africa could be a thriving market for Iran’s technical-engineering services.

Opportunities are plentiful for the private sector in both countries to make their presence felt in the other country’s market. To enhance bilateral ties, Iran and South Africa should identify common ground and remove obstacles. A target of $2 billion in non-oil trade may look ambitious at first, but it is attainable if the two sides redouble their efforts.