Iran, Russia, Turkey Presidents to Meet Once in Every 15 Days 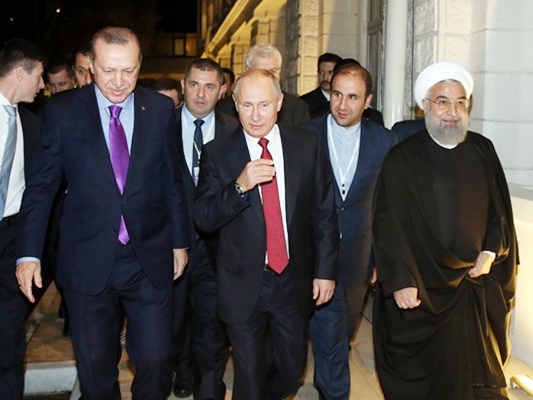 Turkish President Recep Tayyip Erdoğan says the presidents of Iran, Russia, and Turkey have decided to meet each other once in every 15 days or a month.

Erdoğan has declared that Turkey, Russia and Iran will meet regularly to discuss the Syrian crisis, as he commented on a recent trilateral meeting in the Black Sea resort of Sochi.

“Hopefully, we’ll begin to see the positive effects of these decisions on the ground,” Erdoğan said in his address to the ruling Justice and Development Party (AKP) members in the northwestern province of Balıkesir on November 25.

He went on to say that the three leaders will meet once in every 15 days or a month.

“Our meetings will continue regularly,” he added, according to Hurriyet Daily.

Erdoğan, Rouhani and Putin convened on November 22 for a key summit to discuss the political future of Syria, amid hope that the civil war is coming to an end and victory against jihadist groups is imminent.

The leaders agreed on the necessity of a political solution to the Syrian crisis.