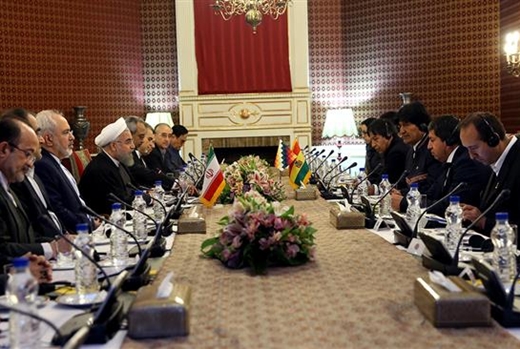 President Rouhani holds separate meetings with his Bolivian and Nigerian counterparts as well as with the Algerian prime minister.

“In our view, independence and national sovereignty of countries are important and if certain individuals seek to trample upon this right of nations, it would be unacceptable,” Rouhani said in a meeting with his Bolivian counterpart Evo Morales in Tehran on Tuesday.

He reaffirmed Tehran’s call for a political solution to ongoing conflicts in Syria, Iraq and Yemen in line with the will of their nations.

Rouhani said Iran and Bolivia are jointly fighting terrorism and unilateralism, and added that terrorist groups should not be allowed to easily carry out inhumane actions.

Morales, who attended the third summit of the Gas Exporting Countries Forum (GECF) in Tehran on Monday, hailed Iran’s stance on fighting terrorism in the world.

He called on all countries to unite and strengthen their cooperation in battling terrorism.

In a separate meeting withNigerian President Muhammadu Buhari, Rouhani said Iran and Nigeria share stance on regional issues and the fight against terrorism.

“As a contagious disease, terrorism is threatening all countries and regions in the world, and a firm and all-out fight against it is necessary,” the Iranian president said.

He added that some countries use terrorism as a means to promote their own policies, calling for stronger cooperation and consultation in the campaign against terrorism.

Buhari, for his part, said Iran is instrumental in promoting global security and stressed the importance of adopting measures for eliminating the scourge of terrorism.

The Nigerian president added that his country attaches great significance to relations with Iran and is determined to further boost cooperation in all fields.

The Iranian president also on Tuesday said all regional issues will be solved through political approaches and dialog.

In a meeting with Algerian Prime Minister Abdelmalek Sellal, Rouhani added that Tehran and Algiers have close stance on regional developments, including the crises in Iraq, Syria, Yemen and North Africa.

He emphasized that Iran and Algeria must enhance cooperation in all sectors, particularly in the economic arena, in a bid to serve the two nations’ interests.

The Iranian president also called for cooperation among energy producers and exporters to preserve market stability.

The Algerian premier, for his part, said Iran is a great power in the region and added that the future lifting of sanctions against Tehran would create more opportunities for the Islamic Republic to establish regional stability.

Sellal added that Iran and Algeria share position on regional issues including the ongoing developments in Libya, Syria and Iraq.