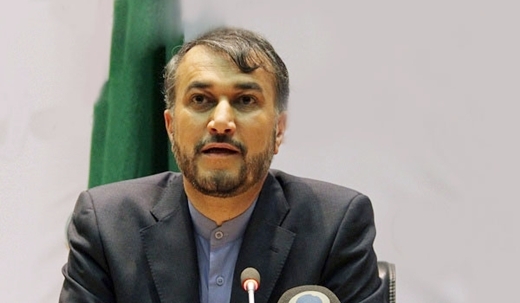 Iran reiterates the need for Iraq's solidarity and territorial integrity as well as political partnership of all tribes in line with Iraq's constitution, said Amir Abdollahian.

“Iran reiterates the need for Iraq’s solidarity and territorial integrity as well as political partnership of all tribes of the country in accordance with Iraq’s constitution,” Amir Abdollahian said in a meeting with an Iraqi Kurdistan Region delegation in Tehran on Friday.

He pointed to Iran’s support for the axis of resistance, and stressed that the campaign against terrorism is one of Iran’s irrevocable foreign policy principles.

In May, Deputy Head of Iraq’s Patriotic Union of Kurdistan (PUK) Barham Salih in a meeting with Amir Abdollahian in Tehran appreciated Iran’s effective support for Iraq under difficult conditions, especially in the campaign against Takfiri terrorists.

“I appreciate the Islamic Republic of Iran’s support for the Iraqi nation, especially the country’s Kurdish people under the difficult epoch-making conditions,” Salih, a former prime minister of Iraqi Kurdistan Region, said.

Salih said that radicalism is a threat to the entire region and the regional countries should boost their cooperation to confront extremists.

The Iranian deputy foreign minister, for his part, appreciated Salih’s constructive role in Iraq’s new developments, and underlined the need for boosting national unity in Iraq through the balanced participation of all tribes in the Arab country’s political structure.

Amir Abdollahian pointed to Iraq’s regional status, and said that consolidation of stability and security in Iraq is a prelude to regional security.