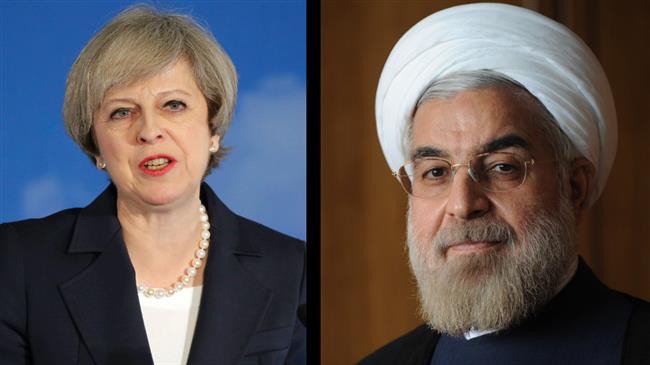 “The Islamic Republic of Iran is following its own national interests by honoring the JCPOA, unfortunately other parties have not carried out their obligations in a satisfactory manner,” said Rouhani on Sunday, during a phone call with British Prime Minister Theresa May.

He added that his country is adamant that its interests must be ensured in accordance to the 2015 deal after the US withdrawal.

The Iranian president further stressed that Tehran has always complied with its obligations while the other parties to the deal have not done so.

“In the JCPOA both parties have certain obligations, it is not acceptable that only one party carries out its obligations,” he added.

He also said that Washington’s move to ditch the deal was very irresponsible.

In her turn, May told Rouhani that British government is committed to ensuring the nuclear deal is preserved.

“[May said] it is in both the UK and Iran’s national security interests to maintain the deal and welcomed President Rouhani’s public commitment to abide by its terms, adding that it is essential that Iran continues to meet its obligations,” said a Downing Street spokesperson.

Earlier in the day, Rouhani said that Iran will remain in the 2015 nuclear deal if other parties to the agreement guarantee the country’s interests.

“If the remaining five countries which have been accompanying us in this agreement live up to their commitments and guarantee that Iran’s interests will be fulfilled, the agreement will remain despite the will of America and the Zionist regime,” he said.

On May 8, US President Donald Trump announced that the US was walking away from the Joint Comprehensive Plan of Action (JCPOA) which he described as a horrible deal.

Iran has said it would remain in the JCPOA for now, pending negotiations with the other signatories in the coming weeks before making a final decision on its future role in the agreement.

Meanwhile, Foreign Minister Mohammad Javad Zarif has embarked on a whirlwind diplomatic tour to gauge international readiness to guarantee Iran’s interests if it decides to remain in a nuclear deal after US withdrawal.

Zarif departed for Beijing in the early hours of Sunday before heading to Moscow and Brussels to hold meetings with the remaining parties to the 2015 agreement, his spokesman said.

Zarif began the tour on President Hassan Rouhani’s order to sound out Europe and other parties to the JCPOA about the possibility of keeping the deal in place. Iran wants the Europeans to give it clear-cut guarantees about fulfilling their obligations if Tehran remains in the deal.

“The European countries should give us guarantees that in spite of the US withdrawal from the JCPOA, the interests of the Iranian nation will still be protected,” IRNA quoted Zarif as telling reporters upon arrival in Beijing.