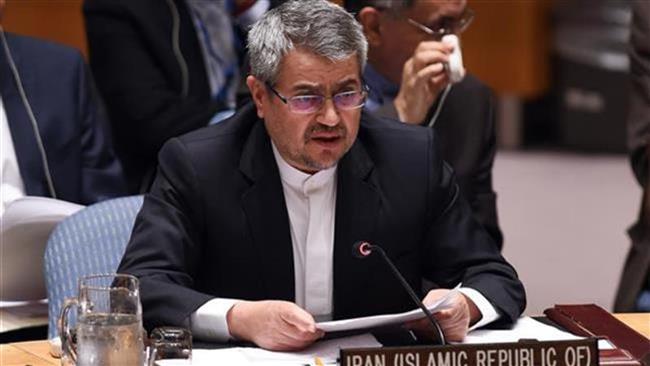 Iran has dismissed the claims made by Saudi Arabia that Tehran is arming Yemen’s Ansarullah movement fighting back the Riyadh regime's 17-month-long military aggression against the impoverished country.

The rejection was made in a letter by Iranian Ambassador to the United Nations Gholam-Ali Khoshrou to the UN Security Council on Wednesday in response to a Saudi letter sent to the council on September 16.

“The Government of the Islamic Republic of Iran firmly rejects the pure fabrications and unsubstantiated allegations, contained in the aforementioned letter concerning the alleged transfer of weapons to Yemeni Ansarullah fighters and the violation of the United Nations Security Council resolutions,” read Khoshrou’s letter.

He added that the Saudi allegations were “quite astounding” as Riyadh itself has invaded Yemen and used “a full variety of lethal weapons against Yemen’s civilians and civilian infrastructure.”

Khoshrou went on to remind the UN of Saudi Arabia’s various atrocities against Yemeni civilians, especially children and women, and the large-scale damage the Arab kingdom’s aggression has inflicted upon the country’s infrastructure.

“The Islamic Republic of Iran has always reiterated that there could be no military solution to this war and has urged for an end to hostilities and a peaceful resolution of this conflict through negotiations and the utilization of peaceful mechanisms,” he added.

Saudi Arabia has been attacking Yemen on an almost daily basis since late March 2015, with the UN putting the death toll at 10,000. The offensive is aimed at crushing the Ansarullah movement and its allies and restore power to the resigned Yemeni president, Abd Rabbuh Mansur Hadi.

Ansarullah fighters took state matters into their own hands after the resignation and escape of Hadi, which threw the country into a state of uncertainty and threatened a total security breakdown.