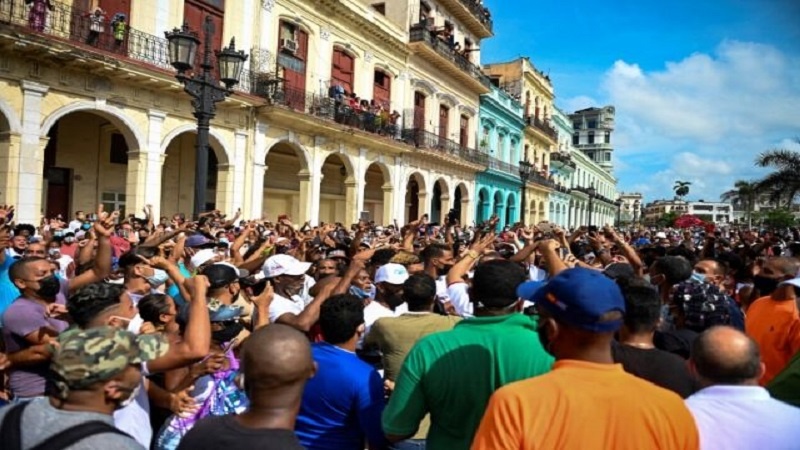 Iran has condemned the intervention of some Western states and the US in the internal affairs of Cuba, describing the US sanctions as the root cause of Havana's problems.

Iranian Foreign Ministry Spokesman Saeed Khatibzadeh said in a statement on Tuesday that Washington must stop its unilateral sanctions against other countries including Cuba.

He noted that Havana has faced widespread US sanctions for more than six decades and these sanctions have complicated the economy and livelihoods of Cubans, especially amid the coronavirus pandemic.

“While the United States is considered the main one to blame for numerous problems created for the Cuban people, it pretends to support the ongoing protests and intends to meddle in the internal affairs of this country in blatant violation of international rules,” added Khatibzadeh.

The spokesman further emphasised that the Islamic Republic of Iran, within the framework of its principled positions, denounces the unlawful US sanctions, which are an important factor behind the economic hardships of the Cuban people, and condemns any interference in the internal affairs of this country.

“As a country facing Washington’s unlawful and cruel sanctions, Iran expresses solidarity with the people and government of Cuba, and calls for an immediate end to unilateral US sanctions against Havana,” he added.

Thousands of Cubans joined demonstrations throughout the country on Sunday to protest Cuba’s economic crisis and handling of the pandemic. Some also called for an end to communism.

The government says the protests are orchestrated by US-financed agents. Havana says the economic crisis is largely caused by Washington’s decades-old trade embargo.