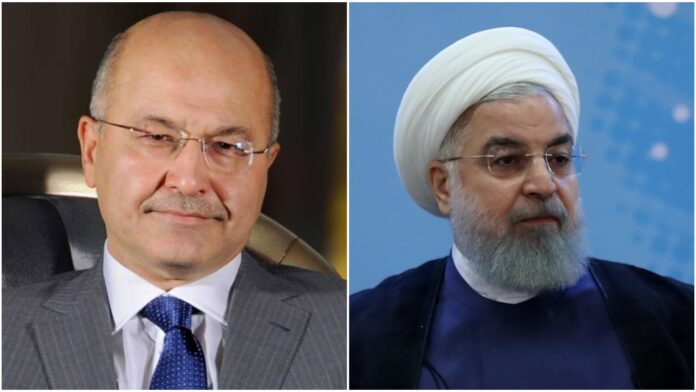 President of the Islamic Republic of Iran Hassan Rouhani has assured his Iraqi counterpart that Tehran will keep supporting the Arab country and its sovereignty, calling for plans to promote mutual economic cooperation and resume the trade exchanges in compliance with the health protocols.

In a telephone conversation with President of Iraq Barham Salih on Monday, President Rouhani gave an assurance that Iran’s principled policy entails the enhancement of cooperation and relations with Iraq in all fields.

“The Islamic Republic of Iran will stand by the Iraqi government and nation like the past, and calls for the protection of Iraq’s sovereignty and non-interference from the foreign powers in the fate of this country’s (Iraq’s) nation and government,” the Iranian president underscored.

He further stressed the need for the expansion of economic cooperation between Iran and Iraq, saying, “We must try to restore the trade exchanges between the two countries to the previous course in full conformity with the health instructions along the entire common borders.”

President Rouhani also expressed hope that the joint plans by the two neighbours would raise the level of bilateral economic ties.

Congratulating his Iraqi counterpart in advance on the occasion of Eid al-Fitr, President Rouhani expressed satisfaction with the fact that the political processes in Iraq have yielded positive results, all Iraqi groups and tribes have joined hands, and the new Iraqi government has been formed after being approved by the Parliament.

“Political stability in Iraq is important for the region, and this process will be surely a prelude to restoration of Iraq’s prominent role in the region,” the Iranian president noted.

The region is currently struggling with a host of problems, such as the plummeting oil prices, the coronavirus pandemic, the security challenges, and, above all, the American interference in the internal affairs of the countries, President Rouhani noted, adding, “The promotion of relations and cooperation between the friendly governments and nations in all fields could help overcome the problems.”

For his part, the Iraqi president tendered congratulations on Eid al-Fitr at the end of the holy month of Ramadan, hailed the suitable level of ties between Baghdad and Tehran, and stressed the need for the officials of the two countries to push for the expansion of relations in various fields.

Highlighting the significance of political relations between the two neighbours, President Salih said, “Stability and security in Iraq requires cooperation from the friendly and neighboring states, particularly the Islamic Republic of Iran.”

Pointing to the political efforts and activities for bringing various Iraqi groups, parties and tribes together to elect a new prime minister, the president emphasized, “Ensuring Iraq’s sovereignty and supremacy is an undeniable necessity that must be recognized in making decisions about the future of this country.”

“The foreign powers must not interfere in deciding the fate of this country,” the Iraqi president underlined.

Deploring the “destructive acts of interference” from the outsiders in the region, President Salih noted, “The Middle East region cannot withstand new crises, so that the interference from the aliens in the region must end immediately.”

The Iranian administration has already pledged unwavering support for the new Iraqi government.