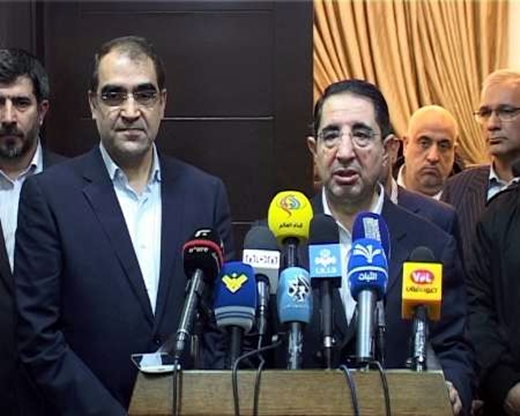 Iran has the potential to provide Lebanon with its medical needs, Iran's visiting Health Minister Hassan Qazizadeh Hashemi has said.

He made the remarks in a meeting with Lebanese Minister of Industry Hussein al-Hajj Hassan.

Iran’s pharmaceutical industry with its highly qualified medical equipments has the potential to provide Lebanon with its needs in this field of medicine, Hashemi said.

He noted that the trend of Iran-Lebanon relations is promoting.

The official said that Iran is to decrease its independence on its oil revenues by boosting the country’s non-oil exports.

Hashemi called for facilitation of Iran’s drugs and medical equipments exports to Beirut, adding that Tehran is currently exporting medicines to Russia, South Africa and a number of the regional states.

The official urged exchange of delegations between the Iran and Lebanon industries to help boost bilateral relation.

He also said that Iranians love the Lebanese Hezbollah Resistance Movement and that the movement’s popularity is increasing in the Islamic World.

Meanwhile, Al-Hajj Hassan, hailed the progress made by Iran in the field of pharmaceutical industry and noted that Lebanon could play the role of a marketing center for exports of the Iranian goods to the region.

The Lebanese minister referred to Iran as a powerful Muslim country that can be relied on by other Muslims.

Referring to the ongoing process for the removal of Iran’s sanctions, the Lebanese minister called for boosting bilateral ties between private sectors of the two countries.

Iran’s health minister arrived in Lebanon on Wednesday at the head of a delegation comprising of health officials, representatives of pharmaceutical companies and investors. He has met so far with his Lebanese counterpart Wael Abu Faour.

The Iranian delegation is reportedly to leave Lebanon for Syria at the end of his visit to Beirut.

He is accompanied in the visit by a number of Iranian investors and managers of companies working in the field of pharmaceuticals and medical equipment.

The Iranian health minister has made the trip at the invitation of his Lebanese counterpart, Wael Abou Faour.