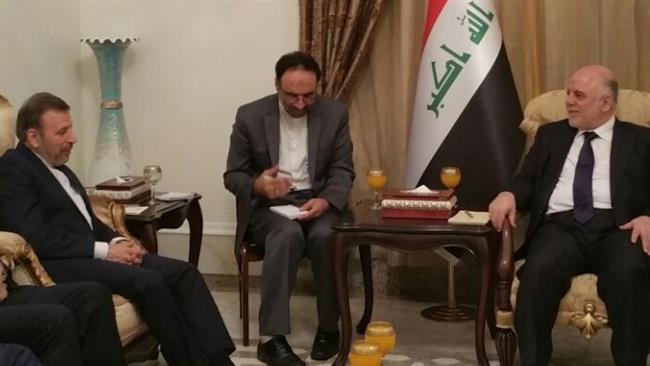 The presence of criminal terrorist groups in any country is dangerous and will lead to regional instability, Vaezi said at a meeting with Iraqi Prime Minister Haider al-Abadi.

An Iranian minister has expressed Tehran’s readiness to help Iraq in the fight against terrorist groups.

“Iran is fully ready to support Iraq in [its] war against terrorism, and we can carry out necessary measures in this regard through expansion of bilateral cooperation with the friend and neighboring country of Iraq in all areas such as communications and information technology,” Minister of Communications and Information Technology Mahmoud Vaezi said in a meeting with Iraqi Prime Minister Haider al-Abadi in Baghdad on Friday.

Vaezi stressed the importance of improving Tehran-Baghdad cooperation, and said Iran is making efforts to fulfill its obligations vis-à-vis Iraq in all arenas.

He further said that the presence of “criminal” Takfiri, terrorist and extremist groups in any country is “dangerous and will lead to regional instability.”

The Iraqi premier, for his part, said the Middle East is facing many challenges, including the danger of the IS terrorists.

Abadi also expressed his country’s willingness to strengthen relations with Iran, which he said would serve the two states’ interests.

Gruesome violence has plagued the northern and western parts of Iraq ever since IS terrorists launched their offensive in Iraq and took control of portions of the country. The militants have been committing heinous crimes against all ethnic and religious communities in Iraq, including Shias, Sunnis, Kurds, and Christians.

In a meeting with Iraqi Foreign Minister Ibrahim al-Jaafari, the Iranian minister said the Islamic Republic supports any plans aimed at promoting regional and international stability and security.

Jaafari, for his part, commended Iran’s support for Iraq in the fight against terrorism.

Iraq is ready to adopt the necessary measures to bolster relations with all countries based on common interests, the Iraqi foreign minister said.

Vaezi also held talks with his Iraqi counterpart Hassan Kazim al-Rashid about the expansion of cooperation, particularly in the communications sector.