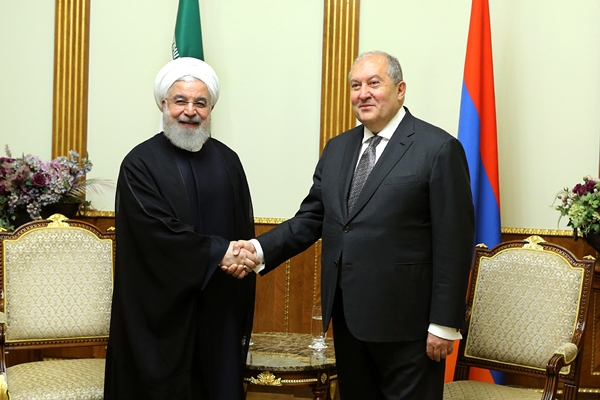 Iran’s President Hassan Rouhani has discussed issues of mutual interest in a meeting with his Armenian counterpart Armen Sarkissian in the city of Yerevan.

During the Monday meeting, the two sides highlighted the importance of developing relations between Tehran and Yerevan in different political, economic and cultural fields.

Rouhani said, “Further development of relations with neighbouring countries, including Armenia, is a tenet of the foreign policy of the Islamic Republic of Iran.”

The Iranian president highlighted the cultural and historical commonalities between the two countries and nations, and said, “The Islamic Republic of Iran and Armenia have ample capacities in different fields, including energy, transit and transportation, tourism, and industry, which can be used to the benefit of both nations’ interests.”

Rouhani further stressed the capabilities of the private sectors of the two countries, and said, “The Islamic Republic of Iran is ready to share with Armenia its experience in different technical and engineering fields, dam construction and energy.”

He further highlighted the significance of cooperation under the Eurasian Economic Union (EAEU), saying, “Iran’s participation in Eurasian Union’s economic relations can be a very good opportunity for deepening bilateral economic relations, and also at the regional level.”

The president also called for enhanced relations and cooperation between the two countries’ free economic zones, including Aras and Meghri, and further attention to the environment and optimal use of the two neighbours’ tourism potentialities.

In turn, Sarkissian stressed that his country attaches great importance to cementing its ties with Iran. “Armenia is seeking to develop relations with the Islamic Republic of Iran in different fields, including economy, industry, energy and environment.”

“The Eurasian region can extend its activities, and in this regard, we are ready to develop relations Tehran,” he added.

The Iranian president arrived in Yerevan on Monday in order to attend a meeting of the Eurasian Economic Union (EAEU), which Iran is going to join as of October 27 as its first membership in a regional economic union.

Before leaving Tehran for Yerevan, Rouhani had noted that joining the EAEU is an opportunity to enhance the economic power at the regional level before a competition on a global scale.

Based on Iran’s agreement with the EAEU, 502 Iranian goods will be subject to preferential tariff rates for the exports to the EAEU members.