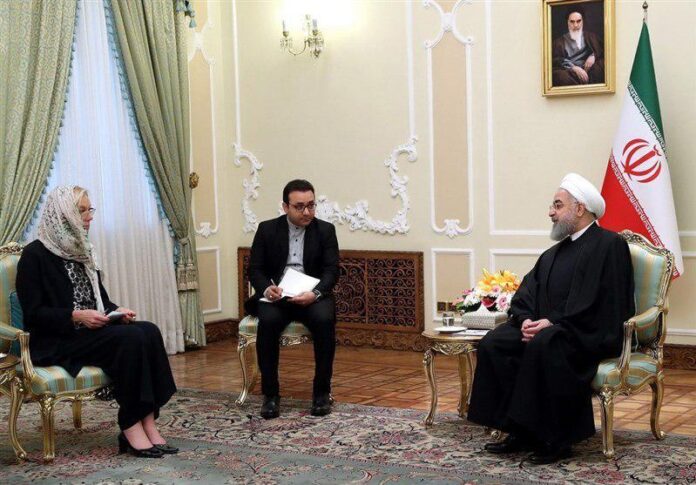 Iran’s president says the Islamic Republic stands ready to negotiate with the European Union over the enhancement of security and stability in the region.

Speaking in a Wednesday meeting with Dutch Foreign Minister Sigrid Kaag, President Hassan Rouhani stressed that Iran is prepared to hold negotiations with its friends in the European Union on boosting security and stability in the Middle East and continuing the fight against terrorism.

The Iranian president particularly referred to the Saudi-led coalition’s war on Yemen, and said Tehran supports any attempts made to end the aggression.

He rejected as utterly baseless and untrue the accusation that Tehran has supplied Yemen with weapons, saying that pressing charges as such will not help solve problems.

“Instead of such blame games, efforts should focus on putting an immediate end to war, establishing a ceasefire, helping Yemeni people, who desperately need assistance, and preparing the ground for intra-Yemeni talks to start,” said Rouhani as quoted by the president’s official website.

Elsewhere in his remarks, Rouhani lashed out at the propaganda campaigns launched by certain countries against Tehran’s nuclear program.

He said international circles turned a blind eye to the Iraqi missile attacks on Iranian cities during Baghdad’s eight-year imposed war on Iran in the 1980s.

Rouhani said other countries refused to sell missiles to Iran to respond in kind to Saddam Hussein’s regime.

“With this historical experience which is related to their country’s national security, our people are sensitive about any issue in that regard, and rightly believe the country’s defence power is not negotiable,” President Rouhani noted.

“Still, we are interested to hold talks with our friends regarding the massive sales, mostly by Western countries, of destructive weapons to the countries in the region, especially the sales of the deadly aircraft and missiles used to kill and displace people and destroy Yemen’s residential areas and infrastructure” he said.

President Rouhani also said Iran and the Netherlands have great potential to enhance their cooperation in different areas, including trade, banking, economy, energy and tourism.

The top Dutch diplomat, for her part, said Dutch companies are prepared to play a more active role in implementing projects in Iran.