Iran Ready for Talks with US Once It Pays Its Debts, Remove Sanctions: Rouhani 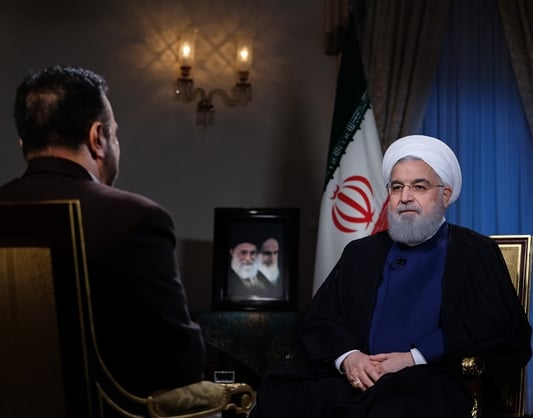 Iranian President Hassan Rouhani says the US must first show its honesty by returning to the Iran nuclear deal, removing anti-Iran sanctions, and pay its overdue debts before sitting for talks with the Islamic Republic.

Speaking in a live televised interview on Monday, Rouhani said constructive interaction with the world has always been his administration’s motto, so “we are open to dialogue.”

However, he added, honesty and hope for achieving an outcome are prerequisites for talks.
If someone has put a dagger in your back, he should first take it out, then call for talks, Rouhani went on to say, referring to the Trump administration’s policy of calling for talks with Iran and at the same time imposing the harshest-ever sanctions on the country.

Rouhani further noted what Donald Trump has done is targeting the Iranian nation. “If Trump shows honesty and returns to JCPOA, we would be able to hold talks.”

Sanctions which are targeting Iranian kids and patients and the US’ pressure on other countries to avoid doing business with Iran must be stopped, and the US must compensate for Iran’s losses, which date back to the US-backed 1953 coup, before such talks could be held, he added.

The Iranian president further pointed to the US’ isolation in the international community, and said except for a few countries, the entire world including European states consider Iran as a reliable partner which keeps its promises.

Europe has done whatever it could for Iran, from passing laws to taking anti-US stances, he said, adding that the country has also received promises from Russia and China for the time of US sanctions.

China and Russia have promised to help Iran in the time of US’ November sanctions on Tehran’s oil exports and banking relations with the outside world, he noted.
They clearly announced that they will implement their deals, as the Chinese did in the case of French energy company Total’s withdrawal from an Iranian project, Rouhani stressed.
He also described Asian countries, including China and India and the ASEAN as very important partners for Iran at the time of US’ sanctions.

Rouhani’s comments came as the first batch of US sanctions on Iran’s automotive and metal sectors, gold trade, aviation industry and other fields snapped back on Monday, and the second part, which focuses on the country’s oil exports and banking relations, will be re-imposed in November.