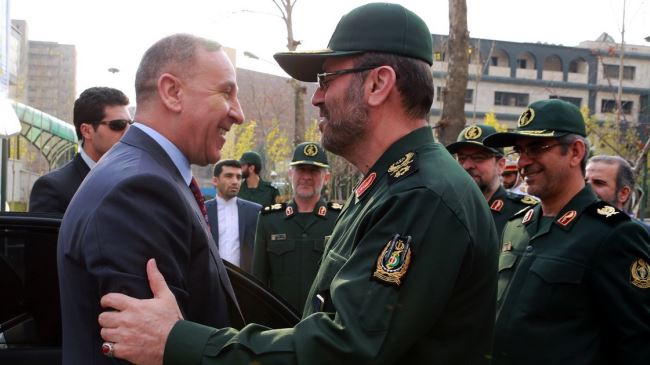 Iran’s support for the Iraqi armed forces is part of the Islamic Republic’s defense and security strategies, Dehghan said in a meeting with Iraqi Defense Minister Khaled al-Obeidi in Tehran on Monday.

He added that support for Iraq’s unity and territorial integrity, promotion of democracy based on the country’s constitution, full establishment of security and the war-stricken country’s progress in all fields are among Iran’s fundamental and sustainable policies.

The Iranian minister further commended the recent victories by Iraqi armed forces over the ISIL Takfiri militants and expressed hope that the fight against terrorism would seriously continue in the country.

Dehghan strongly criticized unilateral measures under the pretext of battling the ISIL militants and said such moves would lead to the persistence and spread of terrorism in the region.

He emphasized that any military intervention in Iraq and Syria against the terrorists must be carried out in coordination with the two countries’ governments.

Obeidi, for his part, said Iraq regards Iran’s support for its armed forces as a strategic imperative.

He also called for Iran’s cooperation in countering terrorism and corruption as well as the reconstruction of the war-torn country.

Iraqi forces have made fresh gains against the ISIL Takfiri terrorists in recent weeks. The most notable of all operations came in November when Iraqi forces retook the strategic town of Baiji and its refinery from the terrorists. The Iraqi army also managed to liberate key districts in the city of Samarra in early December.