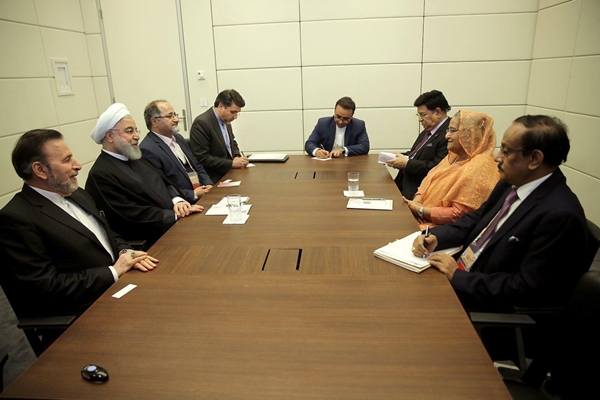 The Iranian president says if Islamic nations remain united, no country, even the United States, can create problems for them.

He was speaking on the sidelines of the 18th Non-Aligned Movement (NAM) Summit in the Azeri capital, Baku.

He further touched upon the Saudi-led aggression against Yemen, the killing of people in that country, and the effect of the Yemen war on relations between regional countries.

“Iran is making every effort to be able to settle the problems that have caused divisions in the region,” he said.

Elsewhere in his remarks, Rouhani referred to the plight of displaced Rohingya Muslims in Bangladesh, and said Iran is ready to offer help in that regard.

He described Bangladesh as a major Islamic country and a friend of Iran and highlighted age-old historical and cultural bonds between the two countries and nations.

He also expressed pleasure over the economic progress of Bangladesh, saying Tehran stands ready to enhance its economic relations with Dhaka, especially on the economic front.

The Bangladesh premier, in turn, expressed her country’s willingness to boost all-out ties with Iran.

She said unity holds the key to success for Muslim countries, saying Islamic nations will turn into a major power if they band together.

She also censured the use of sanctions as a tool against nations, criticizing Washington for slapping sanctions on other countries.

She said her country’s motto in the foreign policy domain was “friendship with all, enmity with none.”

She also presented a report on the status of Rohingya refugees displaced from their homes in Myanmar, saying Dhaka was in talks with Nay Pyi Taw to set the stage for their return home.