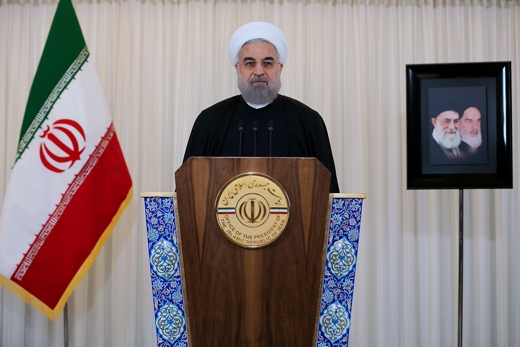 President Rouhani has said that international sanctions imposed against the Islamic Republic of Iran will have been removed early next year.

“After nearly 14 years, it became clear that this [Islamic] establishment has been speaking honestly with its own people and the world. It has never lied. It does not lie, [and] it remains committed to its promise,” he said.

Rouhani reiterated that the Islamic Republic will continue to respect its obligations under its agreement with six world powers.

The Iranian president was speaking one day after the IAEA’s Board of Governors overwhelmingly voted in favor of a draft resolution which brings down the curtain on its investigation into the past and present outstanding issues regarding Iran’s nuclear program.

The draft resolution on Iran’s past nuclear activities had been submitted by P5+1 on December 7.

Rouhani said the “resolution of the PMD issue” removed one of the “important obstacles to the implementation” of Iran’s nuclear deal with the world powers, known under the Joint Comprehensive Plan of Action (JCPOA).

“The ground is now prepared for the implementation of JCPOA,” he said.

Rouhani said international sanctions imposed against the Islamic Republic will have been removed early next year.

Iran and P5+1 – the United States, Britain, France, China, and Russia plus Germany – concluded the Joint Comprehensive Plan of Action in Vienna on July 14.

Under JCPOA, limits are put on Iran’s nuclear activities in exchange for, among other things, the removal of all nuclear-related economic and financial bans against the Islamic Republic.