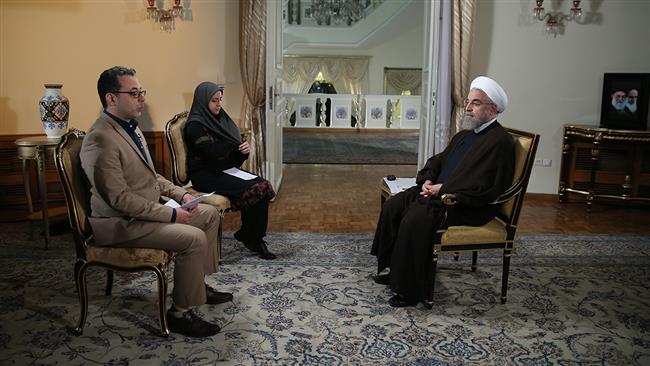 Iran will see the effects of sanctions relief in its economy, President Rouhani predicted.

In a live televised interview on Tuesday, President Rouhani thanked lawmakers for adopting a bill which gives his administration the go-ahead to implement the Islamic Republic’s nuclear deal with six world powers, known as the Joint Comprehensive Plan of Action (JCPOA).

He said Iran and P5+1 start implementing the agreement next week, three months after the UN Security Council endorsed the agreement.

Parliament on Tuesday approved a bill which allows the administration to voluntarily implement its July 14 nuclear agreement with P5+1 under certain conditions.

The outlines of the bill were approved in parliament on Sunday.

Iran’s Guardian Council is set to examine the bill on Wednesday before signing it into law.

Under the Iranian Constitution, the Guardian Council, a 12-member body consisting of six Islamic law experts and six jurists, is tasked with vetting legislative and presidential candidates, supervising elections and overseeing the bills passed in parliament for conformity with the Constitution and Islamic principles.

The president pointed to the illegal US-led economic restrictions against the Islamic Republic, saying, although trade and oil bans had not been unprecedented, Iran was the first country in the world to be subjected to banking sanctions.

Rouhani said his administration’s economic policies had caused the West to realize that imposing sanctions against Iran was ineffective, adding that this also gave the country the upper hand in the nuclear negotiations with P5+1.

“We will see the effects of sanctions relief in our economy,” said Rouhani.

He noted that the unprecedented fall in oil prices was also a plot to make Iran step back from its demands throughout the nuclear talks. But, the president said, this scheme failed too.

Rouhani referred to his administration’s economic policy for curbing the country’s inflation. He said that his administration managed to slash inflation which stood at over 40 percent in 2013 to around 15 percent the following year.

The president said his administration would continue the same inflation curbing policy in the future.

Rouhani said Iran is expected to gain $25 billion from selling oil this year, the lowest in ten years. The president added that Iran’s oil revenues reached $119 billion in 2011 when his predecessor Mahmoud Ahmadinejad was in office.

He added that the expected sanctions relief would let Iran sell oil without any restrictions in the coming years.

President Rouhani once again expressed his condolences over the September 24 deadly crush during the Hajj rituals in Mina, near the holy Saudi city of Mecca, and said the causes of the tragic incident should be clarified for the Muslim world and the Iranian nation.

He added that the clarification of the aspects of the Mina stampede would prevent the recurrence of such incidents in the future.

Rouhani said the tragic incident showed lack of foresight on the part of Saudi rulers which led to the deaths of thousands of men and women from across the Muslim world, including Iran.

According to tallies given by foreign officials, the death toll from the deadly Mina stampede has reached 1,674.  The Saudi kingdom, however, has yet to provide a complete report on the tragedy including an update on its earlier death toll of 769.

Officials at Iran’s Hajj and Pilgrimage Organization say about 4,700 people, including 464 Iranians, lost their lives in the tragedy.