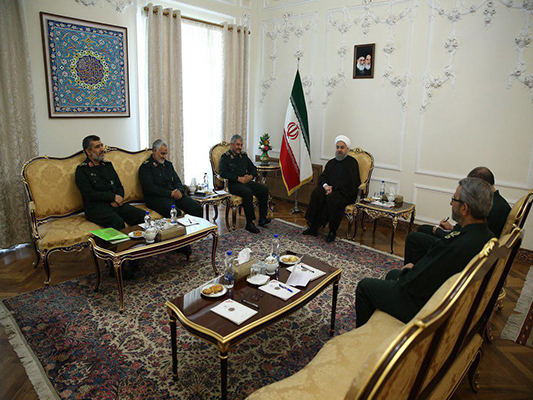 Iranian President Hassan Rouhani, in a meeting with top IRGC commanders, hailed the Islamic Revolution Guards Corps' services, stressing that unity among all Iranian forces is key to serving the nation.

President Rouhani stressed that promoting unity and ensuring coordination among all forces and institutes of the Islamic Establishment is required to translate the guidelines of the Leader of the Islamic Revolution into reality and to offer services to the nation.

According to a Farsi report by the government’s official website, the Iranian president expressed hope that under his new government, the concerted efforts of all armed forces would lead to the immediate meeting of people’s demands.

He also hoped that during the next four years, all the relative institutes and departments would increase their efficiency in their specialized fields through complete transparency.

Rouhani further expressed his hope that strengthening the military power of IRGC and the army through acquiring new technologies would further guarantee the country’s security.

IRGC Commander Major General Jafari, for his part, congratulated Rouhani on his re-election as Iran’s president and praised the Iranian nation for their huge turnout in the presidential election in May.

He also expressed IRGC’s readiness to establish all-out cooperation with the government in all fields to achieve the goals of the Islamic Revolution.

Meanwhile, other IRGC commanders briefed President Rouhani on the latest activities of their military units and thanked the government for its support for promoting the country’s defensive capabilities as well as fighting against terrorism in the region.