Iran President to Meet Mirza Aqa, His Most Famous Supporter 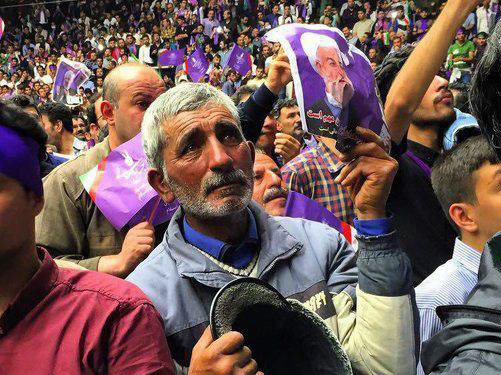 Iranian President Hassan Rouhani is scheduled to meet one of his supporters whose photo was widely circulated in his election campaign before garnering the majority of votes in May 19 presidential vote.

Iran’s President Hassan Rouhani is planned to meet one his famous supporters, an old man known as Mirza Aqa from the northwestern Iranian province of Ardabil, whose photo was widely shared on social media prior to Iran’s May 19 presidential election.

The meeting between Rouhani and Mirza Mousa Taleb-Qeshlaq is going to be held later today (Monday) in the Iranian capital of Tehran.

Amid the partisan clamour of the election campaign, Mirza Aqa’s touching photo went viral on social media. It was the photo of a man holding a poster of Rouhani in his hand during a stump speech in Ardabil on Rouhani’s campaign trail. The tears in Mirza Aqa’s eyes showed that he had a lot to say.

The photo rapidly came under the social media spotlight grabbing all the attention. Many still remember him as an effective figure who played a significant role in championing support for Rouhani during the pre-election period.

Mirza Aqa was standing among Rouhani’s supporters with his eyes full of fear and hope. He voiced his support for Rouhani, while holding his picture, to show that the incumbent president’s supporters are not merely from a certain wealthy social class, as claimed by Rouhani’s rivals.

Following the going viral of Mirza Aqa’s photo on social media, a video of his remarks in an interview was also released, in which he was asked about his very effective photo.

“When Mr. Rouhani said we squeezed out the money frozen at American banks from the hand of the US, tear sprang into my eyes. I am extremely grateful to Mr. Rouhani for what he did. Long live Mr. Rouhani.”

The great impact of Mirza Aqa’s photo on Rouhani’s re-election campaign over the course of his visit to Ardabil, and his supporters, convinced many to ask the re-elected president to find and meet him.

As confirmed by the governor-general of Ardabil Province, Majid Khodabakhsh, Rouhani is going to meet Mirza Aqa who is a man from the lower social class and, due to his financial problems in the time of former president Ahmadinejad, has been forced to sell his van, his only means of livelihood, and make a living from selling fruit without any vehicles.

In a Farsi interview with the Etemad Newspaper, he said, “I like Mr. Rouhani very much. I also liked Mr. [Akbar] Hashemi [Rafsanjani, the late chairman of the Iran’s Expediency Council] a lot. Several years ago, when [ex-president] Mr. [Mohammad] Khatami had travelled to Ardabil and was [delivering a speech] at the city’s sports complex (Takhti stadium), I liked very much to go and see him, but I arrived there late. He was gone. Thus, when I heard that Mr. Rouhani had come to Ardabil and is planned to deliver a [stump] speech at the same venue, I hurried there to see him. On that day, I had bought 200kg potatoes from the wet market and had carried them on my handcart to a local square to sell them. Nevertheless, as soon as I heard Mr. Rouhani was heading for Takhti stadium, I left my handcart, as well as the potatoes, in the street and ran all the way to the stadium.”

“A few days earlier, I had received a number of photos of Mr. Rouhani, and I had put them on my handcart next to the potatoes and onions I sold to people and showed them to my customers, telling them to vote for him. I made my customers swear to God that they will cast their ballots in favour of Mr. Rouhani.”

When asked about what he is going to tell Mr. Rouhani when he meets him, Mirza Aqa said, “I have not seen my young son, who is working in Tehran, for 17 months. Tonight (May 21), I will head for Tehran to go to Iran’s state TV (the Islamic Republic of Iran Broadcasting), along with my son, and give an interview tomorrow (May 22) early in the morning. Then, as they have arranged for us, we will meet Iran’s president. I want to ask Mr. Rouhani to provide my son with a job.”

Asked about how he found out that his photo had gone viral on the social media, he said one day, as usual, he had been carrying the potatoes and onions he had purchased from the market on his handcart to where he wanted to sell them when a young bank clerk showed him his photo on the screen of his mobile phone and told him that he has become quite famous.

On his present living condition, he said he has a daughter, who is married and has a child, and a 27-year-old son who has been working in Tehran for years.

“Since I was young up until a few years ago, I sold fruit with my van at the local square, until one day, the staff of the municipality came and took away all my fruit. It was what they always did. After that, I did not have any money to buy more fruit from the wet market. Even if I had the money, they would not let me sell fruit in the street. I was bankrupt. I obtained a 4-million-toman loan with an interest rate of 20 percent [from a bank] to be able to meet my expenses and live a normal life. I had to pay more than $30 per month to pay off the loan. My life had been back to normal again, until a few months ago, they [the staff of the municipality] took away one of my handcarts from me and smashed it into pieces. I still have another handcart and am working with it. Since the time my daughter got married, I am settling her debts. It is almost impossible to run a life and pay back all the debts with only $8.5 per day. Nevertheless, I always thank god.”

Mirza Aqa is a disabled war veteran and is very emotional. While, speaking, every now and then, he shed some tears. He was worried about his homesick son and the debts he has to pay off because of purchasing his daughter’s dowry. But, he is hopeful to see better days in the future.