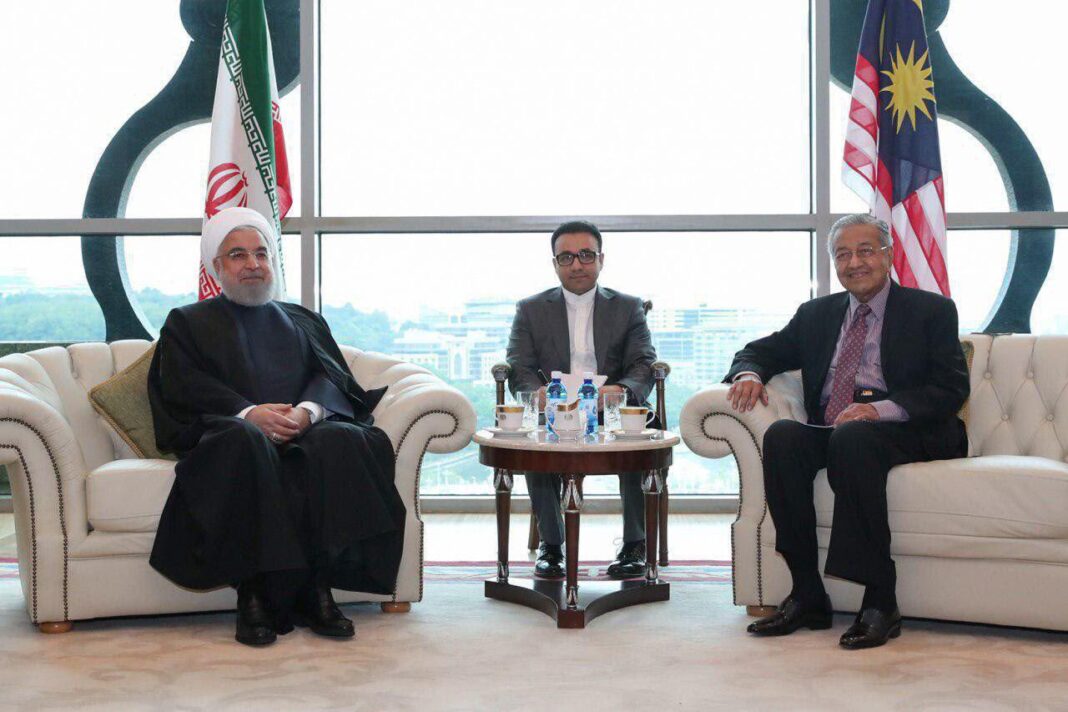 President of the Islamic Republic of Iran has called for collective cooperation among the Muslims states, which he described as one family, to counter the hostile pressures from the big powers.

In a Wednesday meeting with Prime Minister of Malaysia Mahathir Bin Mohamad in Kuala Lumpur, Iranian President Hassan Rouhani said the world Muslims are members of a same family that should behave responsibly towards each other.

“It is necessary for the Muslim countries to cooperate in countering the pressure of big powers,” the Iranian president said.

“Many of the problems of Muslims are caused by the US interference, such as the sanctions against Iran,” President Rouhani added.

Denouncing an intensification of the US’ “cruel and unilateral” sanctions on Iran over the past two years, the president said such sanctions have been imposed in violation of the UN Security Council Resolution 2231 after the US withdrawal from the 2015 nuclear deal.

He also highlighted the futility of the US sanctions in light of the Iranian people’s resistance, saying the Islamic Republic has managed to improve its economy in the past five months despite the US policy of maximum pressure.

The Iranian president further called for efforts to enhance the relations between Tehran and Kuala Lumpur in various fields, adding, “The two countries should promote their scientific and technological cooperation, while the spheres of energy, industry, tourism, maritime cooperation, and the information technology could be suitable arenas for mutual cooperation.”

The foreign sanctions would not erode Iran’s determination to broaden cooperation with Malaysia, he underlined, saying the two Muslim nations can work together in the medical field and also develop a joint brand with industrial cooperation.

He also expressed hope that the KL Summit 2019 in Malaysia would help resolve problems in the Islamic countries, adding, “Such conferences could be effective for the settlement of Muslim problems, particularly in the Middle East.”

President Rouhani finally urged efforts to address the problems that Iranian people residing in Malaysia are facing, and highlighted the significance of holding sessions of Iran-Malaysia Joint Commission on Economic Cooperation.

The Malaysian leader, for his part, called for the expansion of ties with Iran in various fields, saying Malaysia supports Iranians and is resolved to promote trade cooperation with the Islamic Republic.

Mahathir Bin Mohamad also condemned the “illegal” anti-Iran sanctions that violate the UN regulations, saying efforts are underway to give a boost to the trade ties with Iran.

Iran is making headway in spite of the pressures from the US and Europe, the Malaysian leader added, saying his country needs to learn from Iran’s experience of dealing with the foreign pressures.
Describing the KL Summit as an opportunity for the Muslim states to share experiences, Mahathir Bin Mohamed said his country will maintain the trade and economic relations with Iran.

The summit will be held at the Kuala Lumpur Convention Centre from December 18 to 21.

Over 400 people, including 250 leaders, politicians, and thinkers from 52 countries, will attend the event.

The Iranian president is to deliver a speech at the KL Summit and elaborate on the Islamic Republic’s regional and international policies. He will also hold bilateral meetings with some of the leaders and officials attending the event in order to discuss bilateral, regional, and international issues of mutual interest.

The Kuala Lumpur Summit is an international platform for Muslim leaders, intellectuals and scholars from around the world to discuss and exchange ideas about issues revolving in the Muslim world, according to its website.