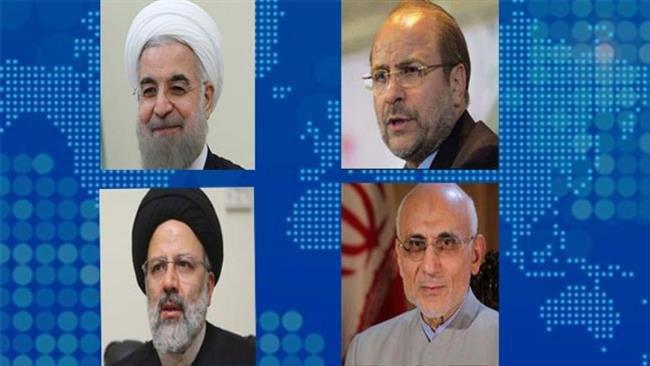 Poverty takes the center stage in Iran's presidential campaigning as candidates travel across the country to take their message to the voters ahead of an expected close race on Friday.

Incumbent Hassan Rouhani pledged to eradicate “abject poverty” over the next four years if he is re-elected as he addressed a crowd of thousands at Azadi Stadium Tehran.

Speaking to the audience, Rouhani called on them “to declare to the world in this election that we are determined to build our future, not to destroy Iran’s future.”

The president also defended his performance in the face of scathing criticism, saying his administration had managed to establish “economic stability” in the country.

Rouhani said inflation for foodstuff stood at 51 percent at the start of his mandate, adding his administration had brought it below eight percent.

Low-income families had to pay up as much as 200 million rials ($5,000) for a surgical operation, but they can receive the same service at less than one-twentieth of the cost now, he said.

Rouhani further said his government would not be cutting monthly subsidies as rumored in some rural areas.

The issue of monthly handouts has become a hot subject, with one candidate pledging to raise them five-fold.

The president also touched on corruption, saying it is rooted in lack of transparency. His government, he added, has submitted a bill to Parliament, obliging all organizations to present their track record for audit.

Rouhani also pledged to root out smuggling, saying the problems had to be tackled through producing quality goods and making them competitive. Border provinces, he said, should become hubs for exports instead of being a haven for smuggled commodities.

Fear of technology has become another impediment for the country, the president said. “One cannot avoid using the cyberspace and the technologies related to it,” he said.

Tehran Mayor Mohammad-Baqer Qalibaf, who has emerged as the biggest critic of the administration, told his female supporters in Tehran that the government was favoring certain people and creating a class divide.

He cited unemployment, inflation, and high prices at the heart of the country’s “economic crisis.”

Separately, Qalibaf said in televised remarks that the management system governing the country was outdated, related to 60 years ago.

He said liquidity under President Rouhani had ballooned by 8,000 trillion rials ($246 billion), becoming a burden for the country and preventing it from turning its economic maladies around.

Another candidate, Seyyed Ebrahim Raeisi (seen below) likewise said Iran suffered from economic mismanagement, while the country had everything it needed for progress at its disposal.

He was speaking in the city of Urmia in northwestern Iran, where he said his government would instill the culture of “Yes, we can” in the society.

The slogan, he said, would manifest itself in the government resorting to popular resources and “not eyeing foreigners [for assistance].”

No reliance on foreigners

Another candidate Mostafa Aqa-Mirsalim (seen below), the current member of Iran’s Expediency Council, blamed Rouhani’s government for a “belief that we cannot do anything without foreigners.”

The incumbent government, he said, was not one of “prudence, but one of denial” of the country’s problems, adding people’s troubles were now worse than the 1980s when Iran was fighting a war against former Iraqi dictator Saddam Hussein.