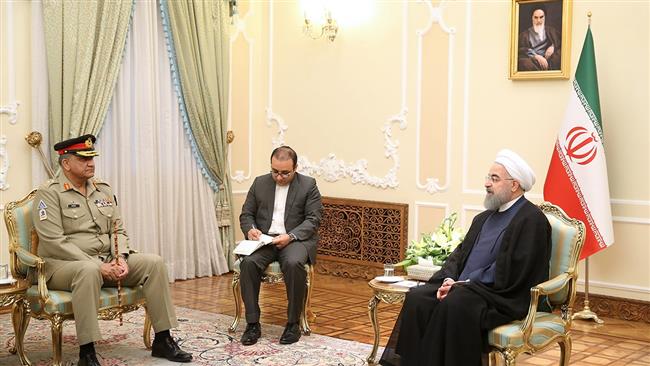 Iran's President Hassan Rouhani says terrorism as well as sectarian and ethnic rifts are the two main issues afflicting the Muslim world, blaming some world powers for creating and spreading such divisions.

“[These] powers are not interested in unity and brotherly [ties] among Muslims, because if such unity and brotherhood is promoted, Muslim countries will undoubtedly be able to solve their problems without the involvement of others,” Rouhani said in a meeting with Pakistan’s Chief of Army Staff Qamar Javed Bajwa in Tehran on Monday.

He added that Iran-Pakistan cooperation could prepare the ground for reinforcing unity among Muslim countries.

Rouhani also welcomed the expansion of defense and military cooperation between Tehran and Islamabad in order to boost regional stability and security, saying that the Islamic Republic was determined to have cordial and strong relations with neighboring countries, including Pakistan.

The Pakistani chief of army staff, for his part, commended deep-rooted mutual relations between Tehran and Islamabad and said his country was keen to improve defense and military ties with Iran in parallel with political and economic cooperation.

Bajwa added that divisions among Muslim countries must be settled through dialogue and emphasized that Western countries must not be allowed to foment discord with the purpose of selling arms to regional countries.

The Pakistani chief of army staff is in Tehran at the head of a delegation of high-ranking military officials. He has also held talks with Chairman of the Chiefs of Staff of the Iranian Armed Forces Major General Mohammad Baqeri and Foreign Minister Mohammad Javad Zarif.

Bajwa’s visit is focused on enhancing the level of defense and security interaction between the two countries and discussing other issues of mutual interest.