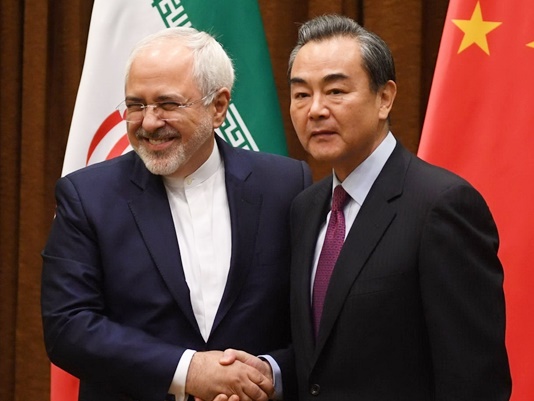 Speaking in a meeting with Chinese Foreign Minister Wang Yi, Zarif said Tehran and Beijing have common views on issues of global significance, saying there are no obstacles in the way of the expansion of bilateral ties.

Zarif praised Tehran-China relations as warm and strong, saying Iran is ready to align itself with China in all areas as the two nations have mutual interests and a common approach towards international affairs.

The officials billed a January visit to Iran by Chinese President Xi Jinping as historical. The two-day trip featured the signing of 17 cooperation documents.

The Chinese official, for his part, said his country supported Iran’s accession to the regional security group Shanghai Cooperation Organization (SCO), of which the Islamic Republic is currently an observer member.

The two sides also laid emphasis on the need to fight terrorism on the global arena, Press TV reported.

They further reminded that all parties to the Joint Comprehensive Plan of Action (JCPOA), the nuclear accord signed last year between Iran on the one side, and the US, Britain, Russia, France and China plus Germany on the other, had to remain fully committed to their contractual obligations.

Wang said the JCPOA is a multilateral agreement endorsed by the UN Security Council, whose implementation should not be affected by any of those countries’ domestic developments.

He was referring to a recent US Congress vote to extend Washington’s Iran Sanctions Act (ISA), a move Tehran has slammed as a violation of the nuclear deal.

Zarif arrived in China as the second leg of an Asian tour that took him earlier to India for the 6th conference of the ‘Heart of Asia-Istanbul Process’.

Speaking to reporters upon his arrival in Beijing on Monday, Zarif said Iran is determined to work with China as a “strategic partner.”

“We try to raise the economic relations between the two countries to a strategic level,” he added, as reported by Tasnim.

The foreign minister also pointed to his accompanying delegation as a distinguishing feature of his trip, saying it is comprised of businesspeople, entrepreneurs, and representatives from 18 knowledge-based companies.

He noted that furthering relations between the two countries was among the subjects highlighted in talks held between Iran’s President Hassan Rouhani and Chinese President Xi Jinping during his trip to Tehran earlier in the year.

The Iranian top diplomat is scheduled to pay a visit to Japan after high-profile meetings in China.