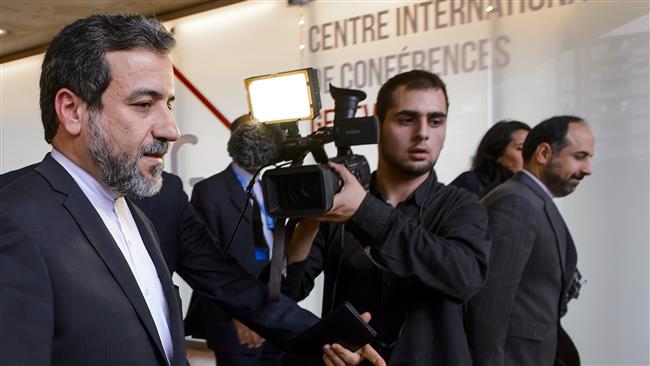 An Iranian negotiator says talks between Iran and the P5+1 on the text of a possible deal between the two sides are progressing “hard and slowly.”

Seyyed Abbas Araqchi, who is Iran’s deputy foreign minister for legal and international affairs and a negotiator at the talks, told IRIB News on Friday that bilateral and multilateral meetings are constantly being held between and among the delegations from the negotiating parties in the current round of the talks in the Austrian capital of Vienna.

He said Iran’s negotiating partners themselves sometimes hold different positions “on sensitive issues,” adding that it is difficult for them to reach a unified position.

“All in all, things are progressing hard and slowly,” the Iranian negotiator said.

Responding to a question about reports that 90 percent of the text of the possible deal has been completed, Araqchi said no figures and percentages can be provided at this time.

“As you know, there is a main text, and there are several annexes; work on each of these [texts] has proceeded on different percentages,” he said, explaining, though, that there has been more progress on the main text.

Araqchi also said that Iranian Foreign Minister Mohammad Javad Zarif will arrive in Vienna on Saturday to take part in the negotiations.

He also said the two sides currently have no plans to stretch the talks past the June 30 deadline. “An extension [of the talks] is currently not on our agenda.”

Iran and the P5+1 – the US, the UK, France, China and Russia plus Germany – are holding talks to finalize the text of a possible deal over the Islamic Republic’s nuclear program. The two sides reached mutual understanding on the key parameters of the potential deal in the Swiss city of Lausanne on April 2.

However, there is no word yet on whether Russian Foreign Minister Sergei Lavrov and Chinese Foreign Minister Wang Yi will also be present for the talks on Saturday, according to the source.