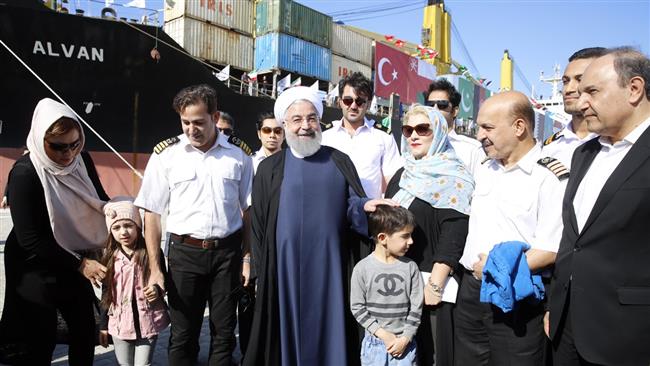 Iran has launched the first phase of a strategic southeastern port which it expects to open a multi-modal trade corridor connecting India to Central Asia.

The first phase of Shahid Beheshti International Port in Chabahar, Sistan-Baluchestan Province, was inaugurated by President Hassan Rouhani during a ceremony also attended by officials and dignitaries from 17 countries.

President Rouhani said during the ceremony that the inauguration of the project marked a historic day for Iran – particularly for the people of Chabahar.

He emphasized that the project was specifically important given that it connected the trade corridors that pass through Iran to the ocean.

“This port is also significant from the political point of view given that it connects Iran with its eastern and northern neighbors and at a later stage to European states,” Rouhani said.

The annual cargo tonnage of Shahid Beheshti Port – Iran’s only oceanic port – has now almost tripled to reach as high as 8.5 million tonnes.

Tehran plans to use Chabahar for transhipment to Afghanistan and Central Asia.

India, Iran and Afghanistan have signed an agreement to give Indian goods, heading toward Central Asia and Afghanistan, preferential treatment and tariff reductions at Chabahar.

Chabahar provides India with an easier land-sea route to Afghanistan. The Indian government has committed $500 million to Chabahar, with an aim to join an increasingly important transport corridor to resource-rich regional countries.

Once the development project is complete, Chabahar will be linked with the International North-South Transportation Corridor (INSTC), which currently stretches from the Iranian port of Bandar Abbas in the Persian Gulf to Russia, Eurasia and Europe.