Iran negotiating with P5+1, not with US Congress: Rouhani 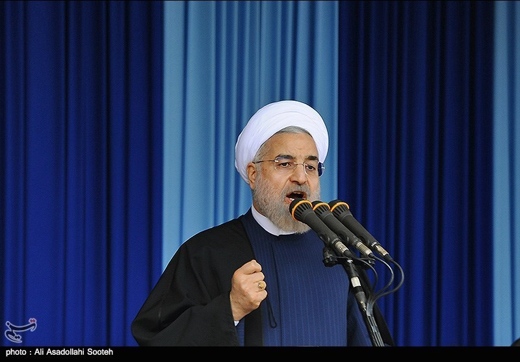 The Iranian president has reiterated that there will be no deal if anti-Iran economic sanctions are not terminated.

Iranian President Hassan Rouhani on Wednesday stressed that Iran is in talks over its nuclear energy program not with the US Congress but with P5+1 (the five permanent UNSC members plus Germany).

“What the US Senate says, what the US House of Representatives wants, what hardliners in the US seek, and what US puppets in the region say are none of our nation and government’s business,” Rouhani stressed, while addressing a huge gathering of people in Rasht, northern Iran.

He made the remarks in reaction to a legislation passed unanimously by the US Senate Foreign Relations Committee on Tuesday giving the Congress power to review a nuclear deal with Iran.

Rouhani went on to say that Iran is negotiating with all the countries in P5+1 (Russia, China, United States, Britain, France, and Germany), not the US Senate or House.

“We want interaction in return for interaction, goodwill for goodwill, and respect for respect,” he stressed.

The Iranian president reiterated that the world, P5+1, and the US Congress, administration, and president need to know that “there will be no deal if (anti-Iran) economic sanctions are not terminated.”

An announcement of the termination of the “cruel economic sanctions against the Iranian nation” once the deal is signed should be the point where the negotiations end, Rouhani reiterated.

He also reminded that the prospective nuclear deal will be to the benefit of the whole world.

“All European and American, eastern and western companies and even their governments are waiting for a final deal because it would benefit the whole world,” he underlined.

Back on April 2, Iran and P5+1 reached a framework nuclear agreement after more than a week of intensive negotiations in Lausanne, Switzerland, with both sides committed to push for a final, comprehensive accord until the end of June.

The framework provides a series of solutions that will be the basis of a comprehensive Joint Plan of Action.