Iran must be immunized against sanctions: Ayatollah Khamenei 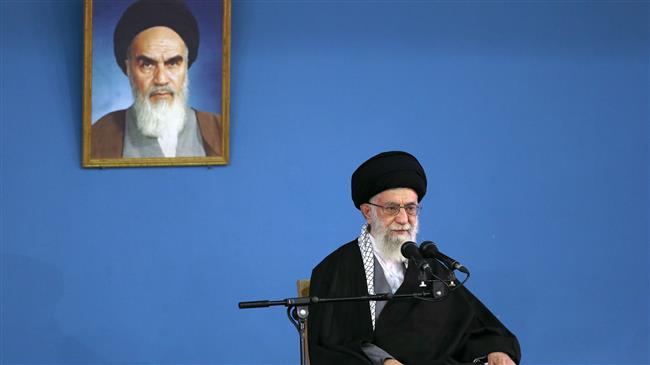 The Leader said that the only way that Iran could counter enemy’s power is for the country to be immunized against sanctions.

Leader of the Islamic Revolution Ayatollah Seyyed Ali Khamenei says Iran needs to be immunized against sanctions imposed on it over its nuclear program.“Sanctions have created problems for the country but if the enemy sets a condition for the removal of them in return [for Iran] to back down on basic… issues, including Islam, independence or scientific progress, definitely the [national] pride of no official will accept that,” Ayatollah Khamenei said in an address to thousands of people in Tehran on Wednesday.The Leader said that the only way that Iran could counter enemy’s power is for the country to be immunized against sanctions.Ayatollah Khamenei underlined the need for weaning Iran’s economy off petrodollars and said officials should know that the enemy will move ahead if Iran retreats even an iota.“We should act in a way that even if the enemy does not lift sanctions the nation’s progress, prosperity and welfare will remain unharmed,” said the Leader.Ayatollah Khamenei also slammed US officials for what he called their shameless rhetoric that they won’t lift anti-Iran sanctions all at once even if Tehran gives concessions over its nuclear program.The Leader said he does not disagree with the continuation of nuclear talks between Iran and six world powers.The next round of nuclear talks between Iran and the P5+1 group of world powers will be held on January 18.Nuclear negotiators from Iran and P5+1 – the US, Russia, China, France, Britain and Germany – wrapped up their latest round of talks on Tehran’s nuclear program in Geneva on December 17, 2014.The three-day Geneva discussions were held almost three weeks after Tehran and the six countries failed to reach a final agreement by aNovember 24 deadline despite making some progress.The two sides agreed to extend their discussions for seven more months until July 1, 2015. They also agreed that the interim deal they had signed in Geneva in November 2013 should remain in place during the negotiations.