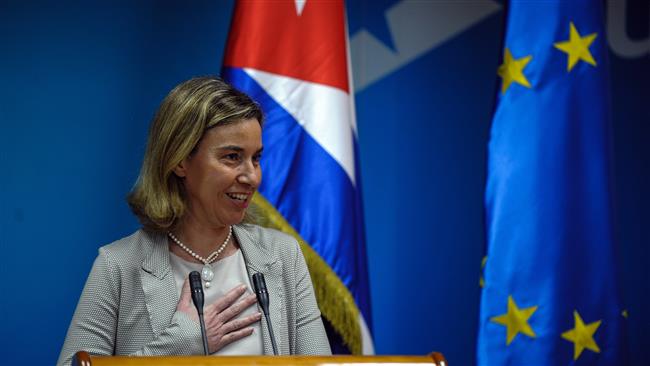 Mogherini made the announcement following an EU foreign ministerial meeting held in Brussels on Monday, a day after France said Iran may face sanctions over the tests.

She claimed that the tests could increase tensions in the region despite not being a violation of the Joint Comprehensive Plan of Action (JCPOA).

Iran fired another ballistic missile dubbed Qiam from silo-based launchers in different locations across the country on March 8.

“We spent a fraction of any other country in the region on defense, and missiles are a means of defense that we require,” he said.

Meanwhile, director general for political and international affairs at Iran’s Foreign Ministry, Hamid Baeedinejad, announced that the UN Security Council had concluded that the missile tests do not violate Security Council Resolution 2231, which provides for the termination of previous UN resolutions on the Iranian nuclear program and establishes specific restrictions that apply to all states without exception.

“As expected, the Security Council wrapped up today’s session without adopting a decision after hearing the opinions of the US and some other member states,” Baeedinejad said after a closed-door meeting of the 15-nation council.

Earlier, Russia’s envoy to the United Nations Vitaly Churkin also announced that the tests were not in violation to the UN resolutions and that his country was opposed to imposing new sanctions.

Reacting to Churkin’s remarks, the US ambassador to the UN promised to continue for action against Iran’s ballistic tests.

“We’re not going to give up at the Security Council,” Samantha Power said.

After the JCPOA went into effect, all nuclear-related sanctions imposed on Iran by the European Union, the Security Council and the US were lifted. Iran, in return, has put some restrictions on its nuclear activities.