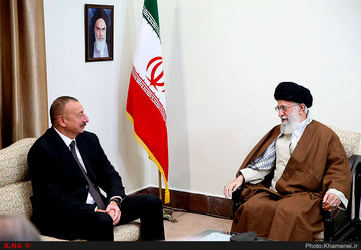 Leader of the Islamic Revolution Ayatollah Seyyed Ali Khamenei has waned that the close and brotherly relations between Iran and the Republic of Azerbaijan have some opponents.

Iran’s Leader also called for resistance against the (opponents’) temptations and sabotage saying that bilateral ties and cooperation must be expanded in different fields in a highly motivated way.

Referring to the fact that the majority of the population of the Republic of Azerbaijan are the followers of Ahl al-Bayt (AS) like Iran and Iraq, Ayatollah Khamenei said this great opportunity to hold glorious mourning ceremonies by the Shiites in Azerbaijan must be seized because they give Azerbaijan Republic and its nation more identity.

Leader of the Islamic Revolution also referred to the failure of the Soviet Union in the promotion of Marxism in the Republic of Azerbaijan saying that they failed because of the great faith of the people.

“This year’s glorious ceremony during the month Muharram was an example of the great faith of the Azerbaijani people,” added Iran’s Leader.

For his part, the President of Azerbaijan Republic Ilham Aliyev said he feels at home in Iran and touched upon the significant progress made by the two countries in recent years.

“In our relations with Iran, we are absolutely resolute and will not allow anyone to interfere in the relations between the two countries and disrupt them,” underlined Aliyev.

President of Azerbaijan Republic also highlighted the cooperation between the two countries in cultural, economic, investment, energy and transportation sectors saying that his government is involved in efforts to build (more) mosques in the country.

“We are strengthening our economic and cultural ties with Tehran, and we have a fierce determination to make these relations permanent and sustainable,” added Aliyev.