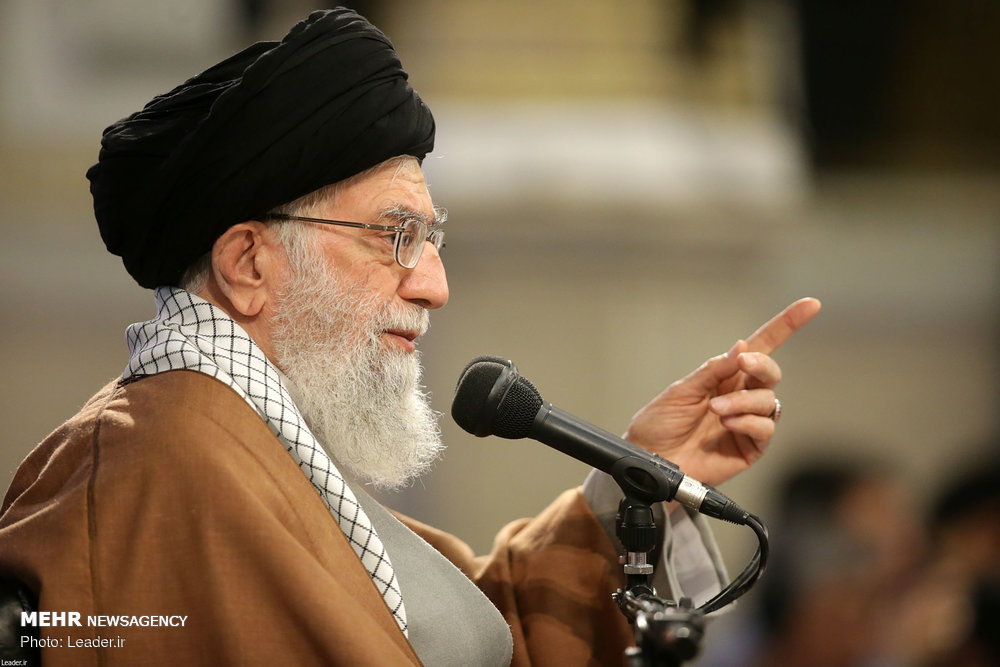 Leader of Iran's Islamic Revolution Ayatollah Seyyed Ali Khamenei has warned Iranian officials against being deceived by the Europeans' deceit, urging caution against the enemy's smile.

In a Monday address to a large group of people from Azarbaijan, Ayatollah Khamenei said, “Officials should know the friend and the foe, and not be deceived.”

Their unclean souls are full of grudge against and hostility towards Islam and the Islamic Republic, he added.

“The US’ enmity is clear; Europeans are also trying to deceive [us] today. I don’t say [to officials] what to do, but officials should beware of being deceived,” the Leader added.

The Leader also warned Iranian officials not to put the country in trouble by getting deceived.

The European signatories to the 2015 nuclear agreement, officially known as the Joint Comprehensive Plan of Action (JCPOA), issued a joint statement on Jan. 31, announcing the launch of a direct non-dollar payment mechanism.

The mechanism is meant to safeguard trade ties with Tehran following Washington’s withdrawal from the nuclear deal and its imposition of the “toughest ever” sanctions against the Islamic Republic.

Iran has welcomed the mechanism, called INSTEX, as “a long overdue first step,” but censured Europe for setting “humiliating” conditions for its enforcement.

‘Enemies Cannot Do Harm with Such Huge Turnout’

Elsewhere in his remarks, Ayatollah Khamenei pointed to the massive participation of Iranian people in rallies marking the 40th anniversary of the victory of the Islamic Revolution, saying the adversaries can never inflict harm on such a great nation.

Ayatollah Khamenei further noted that the enemies would negate that millions of people participated, but they know as long as a nation holds its ground like this, enemies cannot inflict any harm.

Millions of Iranians rallied last week to celebrate the 40th anniversary of the Islamic Revolution. This was much to the dismay of US officials including National Security Advisor John Bolton who had earlier said Iran will not see it’s fortieth anniversary.

Talking about the recent deadly terrorist attack by a Pakistan-based terror group in southeastern Sistan and Baluchestan province, Ayatollah Khamenei mentioned that “such incidents must make us aware of the price we have paid for our security.”

Earlier, the Leader had said in a message that those behind the terrorist attack in the southeast of the country definitely have ties to spy agencies of certain countries.

At least 27 IRGC personnel were killed and 13 others injured in Wednesday’s terror attack in Sistan and Baluchestan province. The Jaish al-Adl terror group that has links to al-Qaeda and Saudi Arabia claimed responsibility. Several entities and officials, including the Iranian president and foreign minister condemned the terrorist attack.