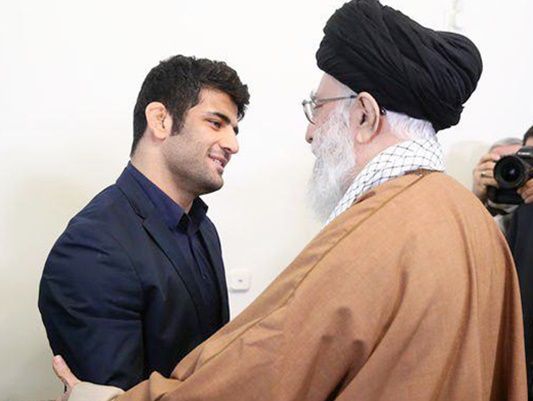 The Leader of Iran’s Islamic Revolution Ayatollah Seyyed Ali Khamenei has commended Alireza Karimi, the wrestler who intentionally lost a match at a tournament in Poland to avoid an Israeli regime’s opponent in the next round.

During the Sunday meeting, Ayatollah Khamenei appreciated the sacrifice and dedication of the young athlete, saying that he did a great job.

“I really felt proud that one of our youths is willing to give up on his wishes for a great and long-term goal, and abandons his absolute right to become a champion,” said the Leader.

He also noted that God gives the spiritual reward of this great move, but the officials must do their best to provide the Iranian wrestler with financial rewards. 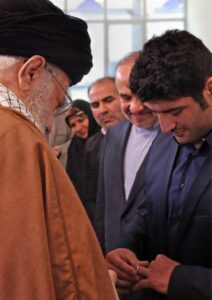 At the end of this meeting, Ayatollah Khamenei gave his ring as a gift to Karimi.

At the U23 World Championship in Poland, Karimi was well ahead of his opponent, Russia’s Alikhan Zabrailov, in the fourth minute. However, with his trainer’s advice Karimi went on to lose the match to avoid facing the Israeli regime’s Uri Kalashnikov in the next round.

Afterwards, the Iranian government was quick to praise Karimi.

“Your noble and heroic action in the world competitions in Poland, abandoning the medal and the podium in support of the highest human values, is a source of pride and praise,” said a statement on the website of Iran’s Ministry of Sport and Youth.