Leader: Removal of sanctions should be part of any nuclear deal 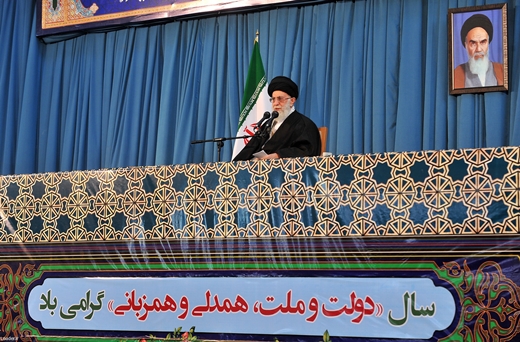 The Islamic Revolution leader says removal of sanctions should be part of any possible nuclear deal between Iran and P5+1.

Leader of the Islamic Revolution Ayatollah Seyyed Ali Khamenei says removal of anti-Iran sanctions should be part and parcel of any possible nuclear deal between Iran and P5+1, and should not come as a late result of those talks.

Addressing the nation at a speech delivered on the occasion of the Iranian New Year in the northeastern Iranian city of Mashhad on Saturday, the Leader touched on the ongoing nuclear talks between Iran and P5+1, mentioning a few points on the negotiations.

Ayatollah Khamenei said the first point is that the United States government is in dire need of nuclear talks.

The Leader noted that apparent differences in the US do not mean that the American statesmen do not need nuclear negotiations, but there are political factions in the US that do not want a government run by their Democrat rivals to pull off nuclear talks with Iran to a final outcome.

“Obama’s Nowruz message included dishonest assertions and his claim of friendship for Iranian people was not sincere,” the Leader said, noting that Obama’s claim that there are people in Iran who do not want nuclear case to be resolved through diplomacy is a lie.

What the Iranian nation is resisting against is the bullying approach of the United States, Ayatollah Khamenei noted.

“They [the Americans] say [to Iranian negotiators] ‘you come here and listen to what we say and implement them word for word’. But our nation will resist against it and will never accept this.”

The Leader went on to say that neither the negotiating team, nor the Iranian nation that supports the team, will ever give in to such bullying.

As for the second point, Ayatollah Khamenei said negotiations with the United States are just about the nuclear case and do not cover regional issues or issues related to Iran’s internal affairs, including defense matters.

“Iran and the US have opposite views on regional issues. We want security and calm in the region, but the arrogant powers led by the US pursue the policy of sowing insecurity in the region, which is quite the opposite of our goals.”

The third point, as put by the Leader, was removal of anti-Iran sanctions, which should be discussed as part of nuclear negotiations and should not be considered a result of those talks.

Ayatollah Khamenei added, “America says ‘we sign the agreement and monitor [Iran’s] behavior and then remove the sanctions’. This is erroneous and unacceptable and Iran will never accept this. This is the Americans’ ploy. Removal of sanctions should be part of any agreement.”

Another point mentioned by the Leader was that Americans expect Iran to take irreversible decisions pursuant to a possible nuclear deal which is not acceptable to the Islamic Republic.

If the opposite side would be able to reestablish sanctions on any grounds, there is no reason for our negotiators to accept an irreversible condition, the Leader added.

In another part of his speech, the Leader said marking Nowruz is not in conflict with religious values as the Iranian nation uses Nowruz as a framework for promoting Islamic values.

Reflecting on the true meaning of promotion of virtue and prohibition of vice as an Islamic principle, the Leader said establishment and protection of the Islamic government is the most important thing from the viewpoint of Islam.

Ayatollah Khamenei noted that, therefore, protecting the dignity of the Iranian nation, paving the way for progress of the Islamic society and promotion of judicial and economic justice are among the greatest of goods in an Islamic society.

The Leader noted that supporting the Islamic government in its efforts to run the country’s affairs is imperative for all people.

Ayatollah Khamenei stated that every government has its own supporters and critics and there is no problem if people criticize the government, provided that their criticism is limited within logical bounds.

The Leader specified that such criticism should not be done in a way as to strip incumbent officials of public trust.

The Leader also advised state officials to allow critics to give voice to their viewpoints, noting that stifling criticism by the government is a mistake.

Ayatollah Khamenei stated that as the Leader, he has never closed eyes on mistakes committed by various governments, but has communicated them to state officials in a suitable manner, including by sending messages or in one-on-one meetings.

The Leader emphasized that his support for every government has been proportionate to that government’s performance in various fields.

Islam expects to see synergism and solidarity among people, Ayatollah Khamenei said, adding that the best manifestation of solidarity is that governments in an Islamic Establishment should be supported by all people even those who have not voted for them.