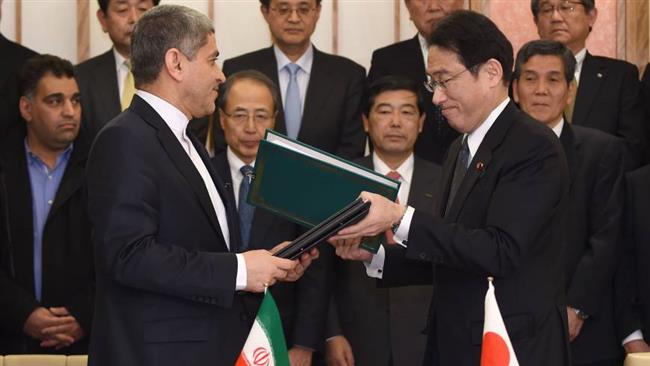 Iran and Japan have signed an investment agreement in a bid to boost economic cooperation after the lifting of nuclear-related sanctions against Tehran.

The agreement was signed by Japanese Foreign Minister Fumio Kishida and visiting Iranian Minister of Finance and Economic Affairs Ali Tayyeb-Nia in Tokyo on Friday following Japan’s move to lift Iran sanctions as a result of the implementation of a nuclear deal between Tehran and the P5+1 group of countries.

According to the Friday agreement, all rights and assets of potential Japanese investors in Iran will be protected, Tayyeb-Nia said.

The Iranian minister added that the foreign party will be insured against all possible non-trade risks under this agreement.

He expressed Iran’s keenness to improve relations with Japan after the removal of sanctions and noted that the signed pact can play a leading role in achieving this objective.

The Japanese foreign minister, for his part, said Tokyo is firmly determined to strengthen economic cooperation with Tehran due to its great potential.

Kishida expressed hope that the investment agreement would help the two countries improve their relations.

Iran and the five permanent members of the UN Security Council – the United States, France, Britain, China and Russia – plus Germany started to implement Joint Comprehensive Plan of Action (JCPOA) on January 16.