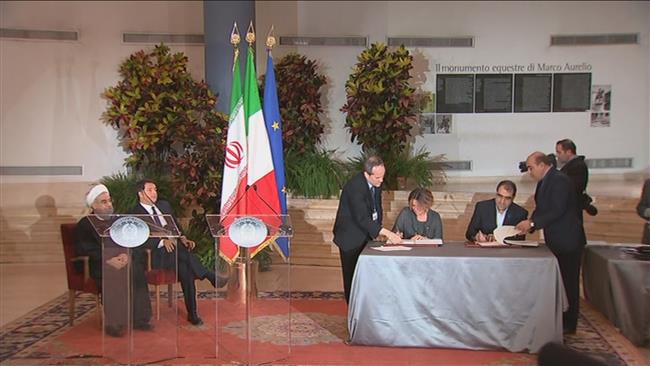 The contracts, worth up to 17 billion euros (USD 18.4 billion), were signed in a ceremony attended by Iranian President Hassan Rouhani and his Italian counterpart Sergio Mattarella in Rome on Monday night.

Prior to the ceremony, Reuters reported that a pipeline contract worth between 3.6-4.6 billion euros (USD 4-5 billion) for Italian oil services group Saipem was among the deals. The company’s shares surged 18.5 percent on Monday.

The Iranian president said the country’s market “offers Italian and European investors the opportunity to establish themselves in the entire region.”

Renzi, for his part, said business agreements Italy signed with Iran were just the beginning of cooperation between the two countries. “We have signed the first accords but we are only at the start of a long road.”

The Italian premier also noted that he had discussed the fight against Daesh terrorist group and the ways to end the war in Syria with the Iranian president. “If we could reach agreement on the nuclear issue, we can find one on Syria. We can and we have to.”

The Iranian president arrived in Italy on Monday on the first leg of his trip to three European destinations following the implementation of a nuclear agreement between Tehran and the P5+1 group of countries.

Rouhani left Tehran at the head of a high-ranking delegation, which includes government officials, Iranian entrepreneurs and businessmen. He was initially greeted by Italian Foreign Minister Paolo Gentiloni at the international Rome Ciampino Airport and then officially welcomed by President Mattarella.