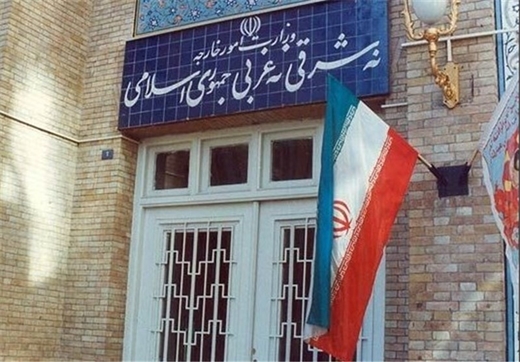 The Iranian Foreign Ministry has released a statement following the adoption of a resolution by the UN Security Council which endorses the deal inked between Iran and P5+1.

The resolution had been negotiated as part of diplomatic talks between Iran and P5+1 (Russia, China, the US, Britain, France and Germany) in Vienna.

Iran and P5+1 on July 14 concluded more than two weeks of intensive talks in Austria. The negotiations resulted in a comprehensive 159-page document on Iran’s nuclear program.

The Statement of the Islamic Republic of Iran

2. The Islamic Republic of Iran underlines the imperative of total elimination of nuclear weapons, as a requirement of international security and an obligation under the Treaty on the Non-Proliferation of Nuclear Weapons (NPT).The Islamic Republic of Iran is determined to engage actively in all international diplomatic and legal efforts to save humanity from the menace of nuclear weapons and their proliferation, including through the establishment of Nuclear Weapons Free Zones, particularly in the Middle East.

3. The Islamic Republic of Iran firmly insists that States parties to the NPT shall not be prevented from enjoying their inalienable rights under the Treaty to develop research, production and use of nuclear energy for peaceful purposes without discrimination and in conformity with Articles I and II of NPT.

4. The finalization of the Joint Comprehensive Plan of Action (JCPOA) on 14 July 2015 signifies a momentous step by the Islamic Republic of Iran and E3/EU+3 to resolve, through negotiations and based on mutual respect, an unnecessary crisis, which had been manufactured by baseless allegations about Iranian peaceful nuclear program, followed by unjustified politically-motivated measures against the people of Iran.

5. The JCPOA is premised on reciprocal commitments by Iran and E3/EU+3, ensuring the exclusively peaceful nature of Iran’s nuclear program, on the one hand, and the termination of all provisions of Security Council resolutions 1696 (2006), 1737 (2006), 1747 (2007), 1803 (2008), 1835 (2008), 1929 (2010) and 2224 (2015) and comprehensive lifting of all United Nations Security Council sanctions, and all nuclear-related sanctions imposed by the United States and the European Union and its member-states, on the other. The Islamic Republic of Iran is committed to implement its voluntary undertakings in good faith contingent upon same good faith implementation of all undertakings, including those involving the removal of sanctions and restrictive measures, by E3/EU+3 under the JCPOA.

6. Removal of nuclear-related sanctions and restrictive measures by European Union and the United States would mean that transactions and activities referred to under the JCPOA could be carried out with Iran and its entities anywhere in the world without fear of retributions from extraterritorial harassment, and all persons would be able to freely choose to engage in commercial and financial transactions with Iran. It is clearly spelled out in the JCPOA that both EU and the U.S. will refrain from re-introducing or re-imposing the sanctions and restrictive measures lifted under the JCPOA. It is understood that reintroduction or re-imposition, including through extension, of the sanctions and restrictive measures will constitute significant non-performance which would relieve Iran from its commitments in part or in whole. Removal of sanctions further necessitates taking appropriate domestic legal and administrative measures, including legislative and regulatory measures to effectuate the removal of sanctions. The JCPOA requires an effective end to all discriminatory compliance measures and procedures as well as public statements inconsistent with the intent of the agreement. Iran underlines the agreement by JCPOA participants that immediately after the adoption of the Security Council resolution endorsing the JCPOA, the EU, its Member States and the United States will begin consultation with Iran regarding relevant guidelines and publicly accessible statements on the details of sanctions or restrictive measures to be lifted under the JCPOA.

7. The Islamic Republic of Iran will pursue its peaceful nuclear program, including its enrichment and enrichment R&D, consistent with its own plan as agreed in the JCPOA, and will work closely with its counterparts to ensure that the agreement will endure the test of time and achieve all its objectives. This commitment is based on assurances by E3/EU+3 that they will cooperate in this peaceful program consistent with their commitments under the JCPOA. It is understood and agreed that, through steps agreed with the IAEA, all past and present issues of concern will be considered and concluded by the IAEA Board of Governors before the end of 2015. IAEA has consistently concluded heretofore that Iran’s declared activities are exclusively peaceful. Application of the Additional Protocol henceforth is intended to pave the way for a broader conclusion that no undeclared activity is evidenced in Iran either. To this end, The Islamic Republic of Iran will cooperate with IAEA, in accordance with the terms of the Additional Protocol as applied to all signatories. IAEA should, at the same time, exercise vigilance to ensure full protection of all confidential information. The Islamic Republic of Iran has always fulfilled its international non-proliferation obligations scrupulously and will meticulously declare all its relevant activities under the Additional Protocol.  In this context, since no nuclear activity is or will ever be carried out in any military facility, the Islamic Republic of Iran is confident that such facilities will not be the subject of inspection requests.

8. The Joint Commission established under the JCPOA should be enabled to address and resolve disputes in an impartial, effective, efficient and expeditious manner. Its primary role is to address complaints by Iran and ensure that effects of sanctions lifting stipulated in the JCPOA will be fully realized. The Islamic Republic of Iran may reconsider its commitments under the JCPOA,  if the effects of the termination of the UNSC sanction, or EU or US nuclear related sanctions or restrictive measures are impaired by continued application or the imposition of new sanctions with a nature and scope identical or similar to those that were in place prior to the Implementation Date, irrespective of whether such new sanctions are introduced on nuclear related or other grounds, unless the issues are remedied within a reasonably short time.

9. Reciprocal measures, envisaged in the dispute Settlement mechanism of JCPOA, to redress significant non-performance are considered as the last resort, if significant non-performance persists and is not remedied within the arrangements provided for in JCPOA. The Islamic Republic of Iran considers such measures as highly unlikely, as the objective is to ensure compliance rather than provide an excuse for arbitrary reversibility or means for pressure or manipulation. Iran is committed to fully implement its voluntary commitments in good faith. In order to ensure continued compliance by all JCPOA participants, the Islamic Republic of Iran underlines that in case the mechanism is applied against Iran or its entities and sanctions, particularly Security Council measures, are restored, the Islamic Republic of Iran will treat this as grounds to cease performing its commitments under the JCPOA, and to reconsider its cooperation with the IAEA.

11. The Government of the Islamic Republic of Iran is determined to actively contribute to promotion of peace and stability in the region in the face of increasing threat of terrorism and violent extremism. Iran will continue its leading role in fighting this menace and stands ready to cooperate fully with its neighbors and the international community in dealing with this common global threat. Moreover, the Islamic Republic of Iran will continue to take necessary measures to strengthen its defense capabilities in order to protect its sovereignty, independence and territorial integrity against any aggression and to counter the menace of terrorism in the region. In this context, Iranian military capabilities, including ballistic missiles, are exclusively for legitimate defense. They have not been designed for WMD capability, and are thus outside the purview or competence of the Security Council resolution and its annexes.

12. The Islamic Republic of Iran expects to see meaningful realization of the fundamental shift in the Security Council’s approach envisaged in the preamble of SCR 2231. The Council has an abysmal track record in dealing with Iran, starting with its acquiescing silence in the face of a war of aggression by Saddam Hussein against Iran in 1980, its refusal from 1984 to 1988 to condemn, let alone act against, massive, systematic and wide-spread use of chemical weapons against Iranian soldiers and civilians by Saddam Hussein, and the continued material and intelligence support for Saddam Hussein’s chemical warfare by several of its members. Even after Saddam invaded Kuwait, the Security Council not only obdurately refused to rectify its malice against the people of Iran, but went even further and imposed ostensibly WMD-driven sanctions against these victims of chemical warfare and Council’s acquiescing silence. Instead of at least noting the fact that Iran had not even retaliated against Saddam Hussein’s use of chemical weapons, the Council rushed to act on politically-charged baseless allegations against Iran, and unjustifiably imposed a wide range of sanctions against the Iranian people as retribution for their resistance to coercive pressures to abandon their peaceful nuclear program.  It is important to remember that these sanctions, which should not have been imposed in the first place, are the subject of removal under the JCPOA and UNSCR 2231.

13. Therefore, the Islamic Republic of Iran continues to insist that all sanctions and restrictive measures introduced and applied against the people of Iran, including those applied under the pretext of its nuclear program, have been baseless, unjust and unlawful. Hence, nothing in the JCPOA shall be construed to imply, directly or indirectly, an admission of or acquiescence by the Islamic Republic of Iran in the legitimacy, validity or enforceability of the sanctions and restrictive measures adopted against Iran by the UNSC, the EU or its Member States, the United States or any other State, nor shall it be construed as a waiver or a limitation on the exercise of any related right the Islamic Republic of Iran is entitled to under relevant national legislations, international instruments or legal principles.

14. The Islamic Republic of Iran is confident that the good-faith implementation of the JCPOA by all its participants will help restore the confidence of Iranian people who have been unduly subjected to illegal pressure and coercion under the pretext of this manufactured crisis, and will open new possibilities for cooperation in dealing with real global challenges and actual threats to regional security. Our region has long been mired in undue tension while extremists and terrorists continue to gain and maintain grounds. It is high time to redirect attention and focus on these imminent threats and seek and pursue effective means to defeat this common menace.