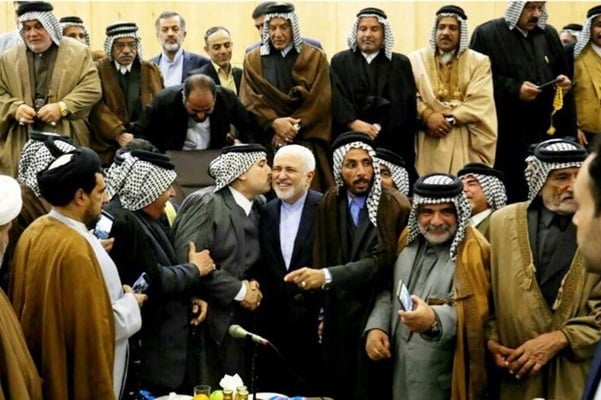 Iranian Foreign Minister Mohammad Javad Zarif says Tehran and Baghdad can increase annual trade volume to 20 billion dollars and if the ground is prepared, the Islamic Republic is ready to proudly share its achievements in energy, engineering, agriculture and trade areas with the Iraq.

Zarif made the comments during a meeting with a group of Iraqi tribal leaders from south of the country in the holy city of Karbala.

During the last leg of his meetings with Iraqi officials, elites and representatives of Iraqi society from various ethnicities and regions, Zarif sat for talks with the tribal leaders and clans’ representatives of southern Iraq in the consulate of the Islamic Republic of Iran in the holy city of Karbala.

During the cordial meeting on Wednesday, some of Iraqi tribal leaders and representatives expressed their views and ideas about the strong bonds between the two nations of Iran and Iraq.

For his part, Iran’s top diplomat referred to the close relations between the two nations over the past centuries and pointed out that nothing, even the imposed war by the former dictator of Iraq on Iran, could not separate the two nations.

“The love of the third Shia Imam, Hussein ibn Ali (AS) has served as a bond connecting us together,” he said, adding that Arba’een, the anniversary of 40th day after the martyrdom of Imam Hossein (AS) is a beautiful picture of companionship, self-sacrifice, hospitality and sympathy between the peoples of Iran and Iraq.

He also thanked Iraqi tribes for their warm hospitality to the Iranian pilgrims flocking to the holy cities of Najaf and Karbala each year to commemorate Arba’een.

Zarif then underlined that Iran and Iraq are now involved in the construction process and added the two sides should put their focus on improving the living conditions of their people through overcoming the current obstacles and preparing the ground for further economic cooperation.