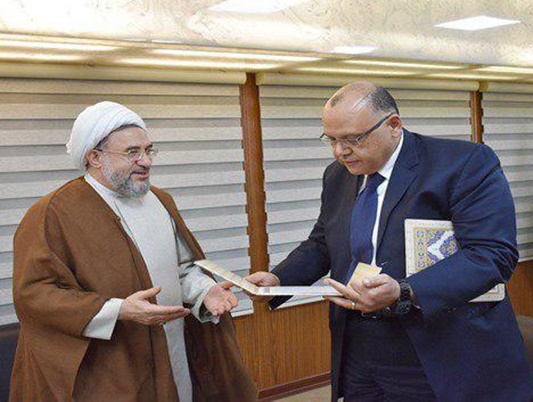 The Islamic Republic of Iran has officially invited Ahmed el-Tayeb, the Sheikh of al-Azhar, to take part in the 31st International Islamic Unity Conference (IUC) due to be held in Tehran in early December.

Ayatollah Mohsen Araki, the Secretary General of World Forum for Proximity of Islamic Schools of Thought (WFPIST), on Sunday met Yaser Osman, the head of Egyptian Interest Section in Tehran, to hand over an invitation letter addressed to Sheikh of Al-Azhar, inviting him to attend the International Islamic Unity Conference.

“The presence of Sheikh of Al-Azhar is very vital to the implementation of the two countries’ joint projects,” Ayatollah Araki said, according to IRNA.

“We are ready for any cooperation with Al-Azhar to form a unified front against the Takfiris,” he said, highlighting role of Egypt in countering the terror threats.

Elsewhere in the meeting, Ayatollah Araki also condemned Friday’s terrorist attack in al-Rawda Mosque in Egypt and expressed condolences over death of a large number of innocent people in the incident

Noting that countering terrorist and criminal thoughts requires Islamic unity, he said that such events are alarming for the Muslim world to stand united, but they fell on deaf ears.

Ayatollah Araki hoped that Iran-Egypt relations will be reestablished as the country boasts of a special situation in the Islamic world for its al-Azhar and that Qom Seminary and al-Azhar would work out a joint scheme to prevent such calamities.

The 31st International Islamic Unity Conference will be held in the Iranian capital of Tehran from December 5 to 7, 2017.

Since 1990, when the World Forum for Proximity of Islamic Schools of Thought (WFPIST) was established, the Conference has been held by this Forum.

The aim of the Unity Conference is to lay the ground for unity and solidarity in the Islamic World and unison among scholars in order to achieve proximity among their scientific and cultural viewpoints in terms of fiqh (Islamic jurisprudence), Usul (principles of jurisprudence), Kaläm (Islamic theology), and interpretation.

Another objective of the Conference is to examine the Muslims’ problems, provide appropriate solutions to them, and take a joint stance against them.

The guests of the Conference are selected from among sophisticated dignitaries, ministers of the Islamic countries, Islamic scholars and muftis, professors of universities and other scientific and cultural associations both at the domestic and international levels.

So far, hundreds of scholars and reformers from around the world as well as thousands of Shiite and Sunni thinkers from various parts of the world have attended this Conference and delivered articles and speeches.

The academic staff of the Conference are selected from among scholars in universities and seminaries.