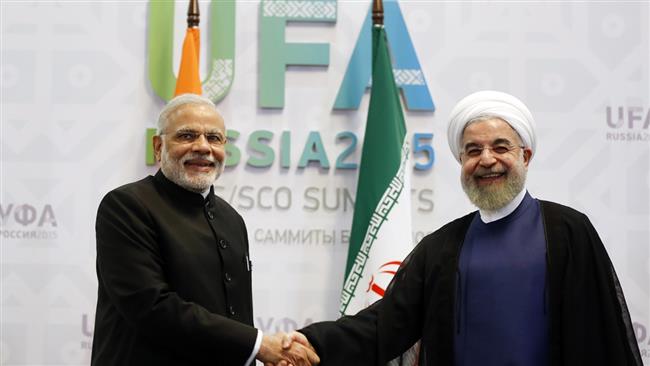 Iranian President Hassan Rouhani has called for the further enhancement of cooperation between the Islamic Republic and India, particularly in countering threats posed by terrorism.

In a Thursday meeting with India’s Prime Minister Narendra Modi, Rouhani said Iran and India play a very key role in fighting terrorism in the region.

During the meeting, which was held on the sidelines of the joint summits of BRICS and the Shanghai Cooperation Organization (SCO) in the Russian city of Ufa, President Rouhani underlined the need for closer cooperation between Tehran and New Delhi not only in “trade and economic areas” but also in “uprooting terrorism in the region.”

Pointing to the spread of extremism and violence in the region, Rouhani expressed regret over the ongoing security crises in Iraq and Afghanistan, saying that the presence of Takfiri terrorist groups, including the ISIL, has further aggravated the situation in the region.

The Iranian president also voiced the Islamic Republic’s readiness to cooperate with India in the fields of energy, investment, tourism and technology.

The Indian prime minister, for his part, highlighted Iran’s strategic role in fighting terrorism and establishing stability and security in the region.

He further pointed to Iran’s proposal, the World Against Violence and Extremism (WAVE), which was adopted by the United Nations in the form of a resolution, saying New Delhi and Tehran should cooperate in fighting extremism.

The UN General Assembly overwhelmingly voted to approve the WAVE proposal, put forward by President Rouhani himself, on December 18, 2013. The initiative calls on all nations across the globe to denounce violence and extremism. The Iranian president made the proposal in his address to the UN Disarmament Conference in New York on September 25, 2013.