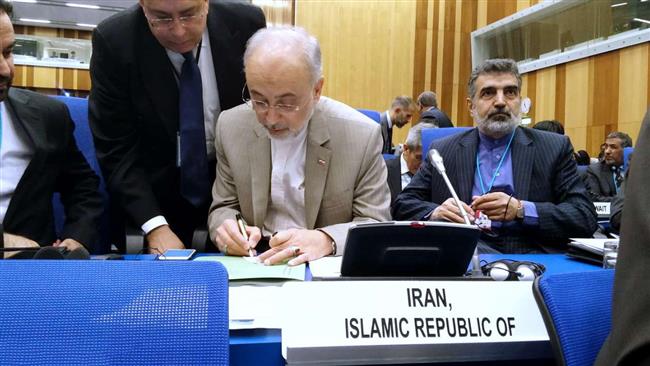 The IAEA chief will travel to Iran in a few days for a follow-up of the Vienna agreement, said Salehi.

The director of the Atomic Energy Organization of Iran (AEOI) has said that Tehran hopes the issue of the so-called Possible Military Dimensions (PMD) in Iran’s nuclear program will be resolved by the end of the year.

“We have an agreement with the IAEA (the International Atomic Energy Agency) about the past and the present issues…[the] IAEA is pursuing what they should do and we have also done what we were supposed to do… [We hope] that the final report will come out by December 15th of this year and we hope that by then the issue will be closed,” Ali Akbar Salehi said on the sidelines of the 59th Regular Session of the IAEA General Conference in Vienna on Monday.

Amano due in Iran

Salehi said that the IAEA chief will travel to Iran in a “few days” for “the follow-up of the agreement that we had in Vienna and we hope, we are doing our best to remove all kinds of obstacles that may be on the way to come to a conclusion by December 15.”

He also thanked Amano for refusing to release confidential information on the agency’s arrangements with Iran despite all the pressure.

“Mr. Amano himself has insisted about the confidentiality of the documents so I would like to put on record our thankfulness to him that despite all the pressure that has been put on him he has not disclosed anything in this regard so he has stayed committed to this and this really makes me, I mean it’s imperative upon me to thank him for that.”

Referring to his meeting with Kazakh Energy Minister Vladimir Sergeyevich Shkolnik, Salehi said the two talked about the recently established fuel bank in the Central Asian country. He added that “Iran could be a supplier of enrichment services to this fuel bank.”