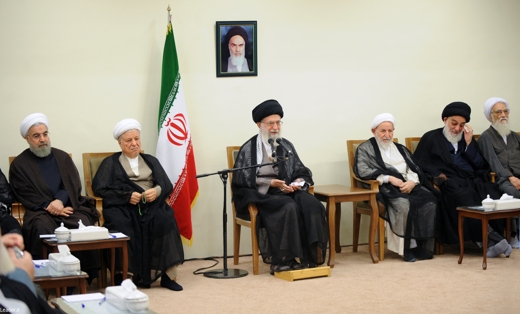 Leader of the Islamic Revolution Ayatollah Seyyed Ali Khamenei says Iran held nuclear talks with the P5+1 countries for the removal of sanctions against Tehran, and that there would be no deal between the two sides if the bans remain in place.

“If the framework of the sanctions is to remain in place [then] what did we negotiate for? This is completely against the reason why the Islamic Republic of Iran partook in negotiations, since the goal of the talks was the removal of the sanctions,” Ayatollah Khamenei said in a meeting with members of Iran’s Assembly of Experts on Thursday.

On July 14, Iran and the P5+1 countries – the United States, Britain, France, China, Russia and Germany – finalized the text of a nuclear agreement dubbed the Joint Comprehensive Plan of Action (JCPOA) in the Austrian capital Vienna.

The Leader said the potential removal of the sanctions was the main reason Tehran gave some concessions at the talks, “Otherwise, there would be no need for us to take part in the negotiations. We could continue our work and could increase the number of our centrifuges to 50,000 to 60,000 from the current 19,000 in a short while and continue 20-percent [uranium] enrichment, and speed up research and development.”

“Should the sanctions remain in place, then there would be no deal either. So this issue must be resolved,” Ayatollah Khamenei said and also rejected the idea that the bans be “suspended” instead of being “lifted.”

The Leader further insisted that Iran’s Majlis (parliament) be involved in the examination of the JCPOA.

“I have no recommendation for the Majlis regarding the manner of the review or whether they should ratify or reject it. It is the representatives of the nation who should decide,” said Ayatollah Khamenei.

The Leader also referred to the comments made by American officials, which were irrelevant to the issue of nuclear agreement.

“They (American officials) say the JCPOA has offered some opportunities to the United States both inside Iran and outside the country and in the region,” Ayatollah Khamenei said.

“One of the US policies in the region is to annihilate and fully destroy the forces of resistance and fully dominate Syria and Iraq and they expect that the Islamic Republic enter this framework. Such a thing would never transpire,” the Leader said, ruling out any negotiation with the US unless on the nuclear issue.

“One should not be duped by the enemy as a result of its smile or probable short-term assistance in a certain issue. We should always find out what the enemy’s plotting and scheme are,” the Leader said.