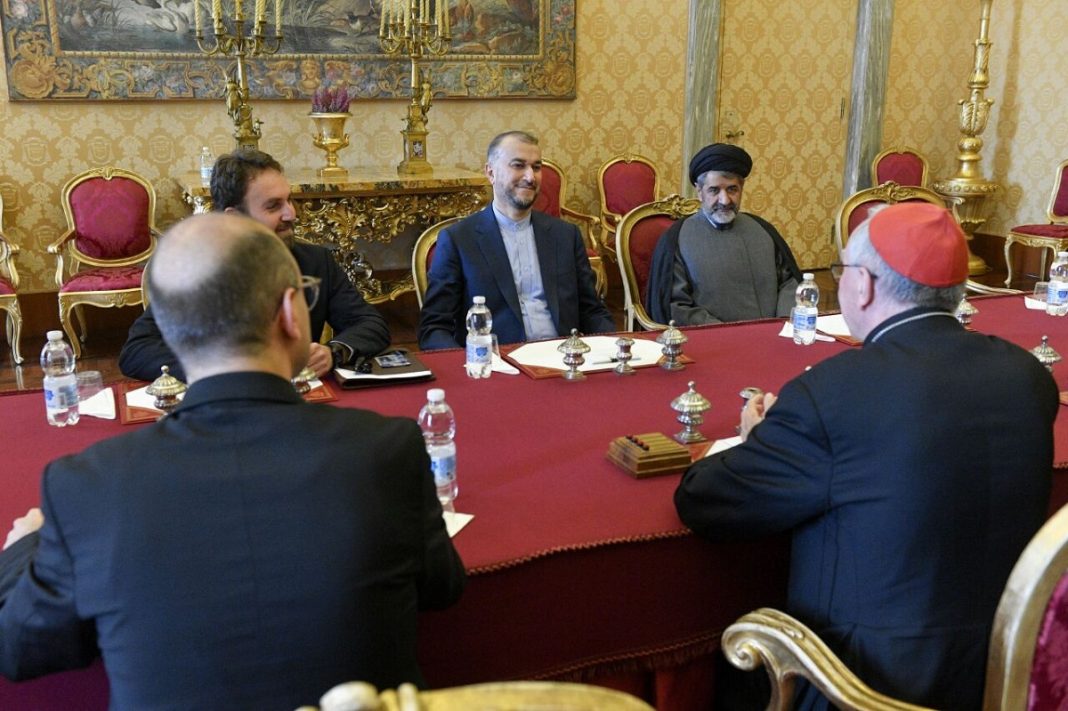 During the talks, the two sides exchanged views on issues of mutual interest and concerns regarding international and regional developments.

The officials of the two countries, while reviewing the bilateral relations, agreed on preparing a mechanism to promote joint cooperation. They also emphasized the importance of interfaith dialogue that was discussed during a visit by (the Iranian Islamic seminaries head) Ayatollah Arafi to the Vatican.

The foreign minister of the Islamic Republic of Iran and the Vatican’s Secretary for Relations with States, while exchanging views on ways to strengthen global and regional peace and stability, emphasized the need for political solutions to crises.

In the meeting held with the Vatican officials, the Iranian foreign minister elaborated on the latest developments in sanctions lifting negotiations and emphasized that the Islamic Republic of Iran is serious about reaching a good and lasting agreement.

He added that Iran has presented important initiatives and shown flexibility during the talks, but it is necessary for the American side to realistically prepare the conditions to finalize the agreement.

Officials of the Islamic Republic of Iran and the Vatican also exchanged views on regional issues and stressed the necessity of establishing stable peace and security, especially in the West Asian region.

The Iranian Minister of Foreign Affairs emphasized that the Islamic Republic of Iran has played an important role in protecting the Izadi Christians of Iraq and the Christians of Syria against Daesh criminal terrorists, with endeavors by Martyr General Qassem Soleimani, and in line with its global responsibility in dealing with terrorism, an issue appreciated by the Vatican.

The Iranian foreign minister also emphasized that Iran is especially concerned about any worsening of the situation in northern Syria and has made significant efforts to prevent a new crisis there.

In the meeting, the Islamic Republic of Iran and the Vatican emphasized their joint views regarding the illegality of political use of extra-territorial sanctions as a tool.

Meanwhile, Amirabdollahian outlined the Islamic Republic of Iran’s approach in favor of political solutions to the crises in Yemen, Ukraine and Afghanistan.

The Iranian foreign minister also explained to the Vatican officials the Islamic Republic of Iran’s democratic plan to hold a referendum among genuine Palestinians, including Muslims, Christians and Jews.

The situation in Lebanon was also assessed by Amirabdollahian and Vatican’s Secretary of State.

Amirabdollahian also invited the Vatican Secretary of Relations with States to visit Tehran.