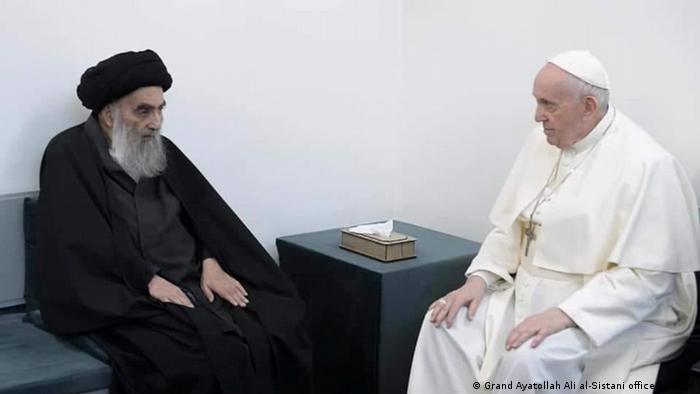 Iran’s Foreign Ministry Spokesman Saeed Khatibzadeh says Iraq’s top religious authority Grand Ayatollah Ali al-Sistani has called for the removal of sanctions against nations in his recent meeting with the pontifex in Najaf.

“The messages Ayatollah Sistani highlighted in his meeting [with the Pope] were very important ones, including attention to justice, the role of faith in settlement of global problems today, fair methods of treating nations including removal of sanctions,” Khatibzadeh said on Monday.

“In this meeting, the world’s religious leaders were also called on to help build a better world. The inalienable rights of Palestinian people were among the other messages highlighted by the top religious authority, all of which were considerable,” the spokesman said in his weekly press conference.

“The [Pope’s] meeting with Iraq’s top religious authority Grand Ayatollah Sistani was an indication of interfaith dialogue and proximity and sends the message of dialogue, peace, and friendship as well as cooperation between civilizations, against [the will of] those who seek violence and bloodshed,” he added.

He also described the Pope’s visit to Iraq as a good and important one.

“The visit is important per se as it indicates that, thanks to the Iraqi people’s bravery, the top religious authority’s prudence, and the lives sacrificed in the fight against extremism and external threats, Iraq is so safe now that one can make such a good and constructive trip to the Arab country.”

“The safety and peace and restoration of calm in Iraq is definitely the message of this trip and similar trips to the country,” he added.